VIDEO of Pope Francis' Meeting with the President of the Republic of Italy, Sergio Mattarella and his Family 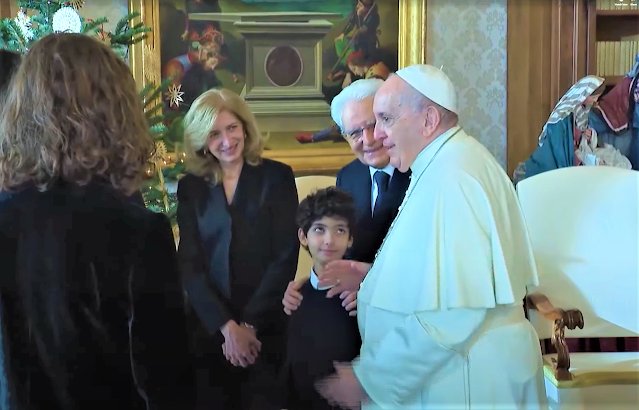 Pope Francis met with the President of the Italian Republic, Sergio Mattarella and his family, in the Vatican’s Apostolic Palace.  His seven year term is about to end. The Italian President was first received in the Vatican on 18 April 2015.
The Holy Father Francis received today in audience, in the Vatican Apostolic Palace, the President of the Italian Republic, His Excellency Mr. Sergio Mattarella, who subsequently met with His Eminence Cardinal Secretary of State Pietro Parolin, accompanied by His Excellency Archbishop Paul Richard Gallagher, Secretary for Relations with States.
During the cordial discussions, which took place in the Secretariat of State, satisfaction was expressed at the good relations existing between the Holy See and Italy, focusing on some issues relation to the Italian social situation, with particular reference to the problems of the pandemic and the current vaccination campaign, the family, the demographic phenomenon and the education of the young.
Attention then turned to some matters of an international nature, with special attention to the African continent, migration and the future, and the values of democracy in Europe.
From the Vatican, 16 December 2021
Source: https://press.vatican.va/content/salastampa/it/bollettino/pubblico/2021/12/16/0856/01801.html
Pope Francis said to the family, "and what do you think about this visit that Grandpa has made?" - "It will be a nice memory." - "A nice memory?" - "It is the third time we have met, but it really is the first time we have spoken directly like this."
The customary, exchange of gifts involved Mattarella giving the Pope a print of the view of Rome from the Quirinal Palace, and a book about the Italian Baroque artist, Guido Reni.
Pope Francis gave the President a painting on ceramic of St. Peter’s Basilica seen from the Vatican gardens, the first copy of his 2022 Message for the World Day of Peace, and the book dedicated to the Pope's Extraordinary Moment of Prayer on 27 March 2020, at the height of the Covid-19 pandemic.