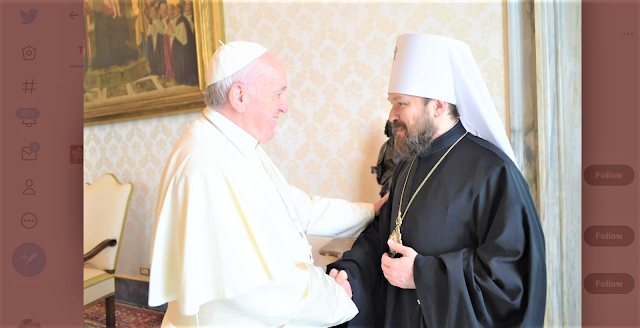 Pope Francis met the Metropolitan of Volokolamsk, His Eminence Hilarion Alfeyev, in the study of the Paul VI Hall on December 22, 2021. The Director of the Holy See Press Office, Matteo Bruni, reported that during the fraternal conversation, they discussed issues of common concern for which the two Churches are committed to seeking concrete human and spiritual responses.
The Holy Father thanked Metropolitan Hilarion for his 85th birthday greetings expressed on behalf of Patriarch Kirill. For his part, Pope Francis expressed his affection and closeness to the Russian Church and to its Patriarch, who recently celebrated his 75th birthday, recalling with gratitude the fraternal conversation they had in Havana in 2016.
After the meeting, the Pope and the Metropolitan exchanged gifts. Metropolitan Hilarion greeted Pope Francis with an icon of the Madonna "of the Sign” and the Holy Father gave a mosaic depicting the Madonna "Synkatabasis of God."The Pope explained, "The Mother of the “Ladder,” she is called. It's the name I've given her." In addition to this he gifted volumes containing papal documents, copies of his Peace Day Message 2022 and of the Abu Dhabi Document on Human Fraternity. Pope Francis explained, "A meeting with Patriarch Kirill is on the not-too-distant horizon. I think that next week Hilarion will comw to arrange a possible meeting, because the Patriarch has to travel—I don't remember where he's going... Finland, but I'm not sure. I'm always willing, I'm also willing to go to Moscow. There are no rules for dialogue with a brother." "We are brothers. We have the same baptism. We are bishops." On this occasion, Patriarch Kirill's representative gave the Pope a replica of an icon from the Theology Academy of St. Petersburg, where the Patriarch studied.
POPE FRANCIS "Thank you. Thank him for me."
-Thank you, may God bless you. Give the Patriarch my best regards. I pray for you. You, pray for me. -Thank you, Holy Father. May the Lord bless your work and give you long years of life and peace.
Edited from Vatican News and RomeReports