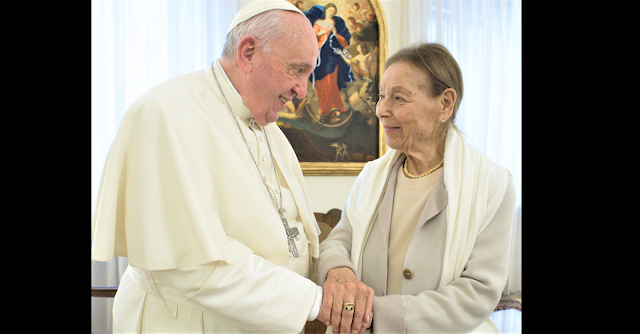 On Holocaust Remembrance Day, January 27, 2022, Pope Francis had a private meeting with an Auschwitz survivor. The Pope spoke with Edith Bruck, who is a Hungarian writer and Auschwitz survivor, for 1 hour in a private audience at the Vatican. A Holy See Press Office statement said the meeting, took place at the Pope’s residence in the Vatican, the Casa Santa Marta. “Both emphasized the invaluable value of passing on to new generations the memory of the past, even in its most painful aspects, so as not to fall back into the same tragedies,” the Vatican Press reports.
This is the second time Pope Francis met with Bruck, after visiting her at her home in Rome in February 2021. He had expressed his desire to meet with her after reading an interview in “L’Osservatore Romano” marking the International Day of Commemoration in memory of the victims of the Holocaust. The statement said that Pope Francis and the 90-year-old author focused on the importance of memory.
(Edited from Vatican News and Press office)