#BreakingNews Priest Killed and another Injured Returning from Church on Sunday in Pakistan - RIP Rev. William 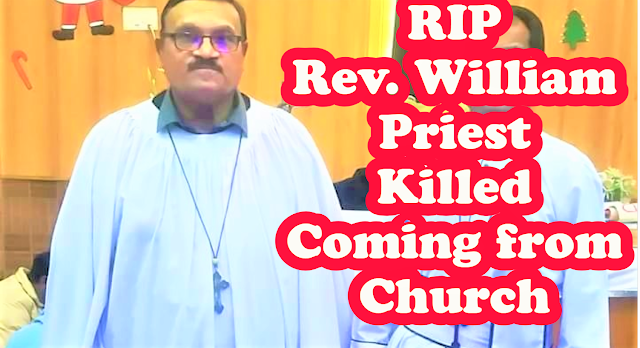 An Anglican priest named, Reverend William Siraj was killed on Sunday, January 30th, 2022 in Peshawar, Pakistan. The clergyman was hit by gunshots fired by some motorcyclists near Ring Road while he was returning home after Sunday liturgy, at "All Saints" Church, in a car together with the Reverend Patrick Naeem. Reverend Naeem was also injured in the ambush. Siraj was 75 years old and was ministering in a church in Chamkani, which is located in Gulbahar district, not far from the site of the assault.
Catholic Archbishop Travas of Karachi: "Immediate and serious measures must be taken against those who undermine peace and harmony".
Bishop Humphrey Sarfaraz Peters, of the diocese of Peshawar and moderator of the Anglican Church of Pakistan, expressed his sorrow at the death of the cleric, saying he prayed that his martyrdom would bring blessings to the local Christian community.
Bishop Sarfaraz also recalled that the Church in Pakistan has faced many challenges, but he thanked God that he continues to call priests to serve his flock.
The faithful recall that the church where the two pastors worked has already been the scene of a terrorist attack: on September 22, 2013, two suicide bombers blew themselves up in the "All Saints" Church in Peshawar after the Sunday Eucharist, causing 127 dead and 170 injured. In several cities across Pakistan, Christians gathered last night to condemn the attacks, lighting candles and raising their voices to demand protection for religious minorities living in Pakistan.
Archbishop Benny Mario Travas of Karachi also expressed the grief of the Pakistani Catholic community over what happened in Peshawar. "All Christians are united with the Anglican Church of Pakistan at this time," he commented. This ambush," he added, "undermines peace and religious harmony throughout the country. For this reason, the archbishop asked the Pakistani government to "take immediate and serious measures, arrest the murderers and work for peace and security for all minorities". Mahmood Khan - the prime minister of the local government of Khyber Pakhtunkhwahas ordered the police to take the necessary steps to arrest the perpetrators. The investigators are checking CCTV cameras in the area.
Edited from Asia News IT and Fides.org