#BreakingNews Washington Cardinal Gregory Issues Statement against Catholics for Choice Protest During the #MarchforLife Vigil “The true voice of the Church was only to be found within The Basilica..." 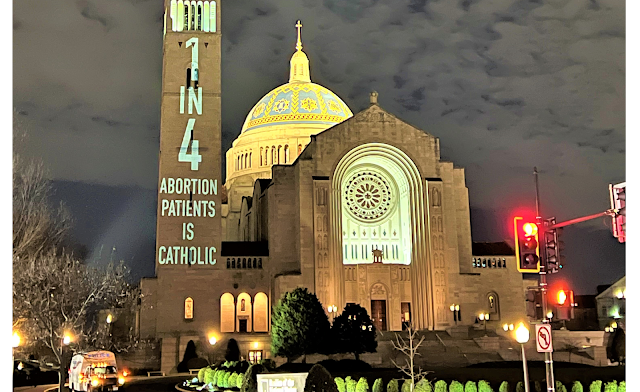 On January 20, 2022, the Pro-Choice group, Catholics for Choice projected slogans (without permission) onto the Basilica of the National Shrine of the Immaculate Conception in Washington, D.C. The projections ran for 90 minutes while the National Prayer Vigil for Life was being held inside.

“This evening, Catholics for Choice proudly stood for pro-choice Catholics and pushed back against the anti-choice activists participating in tomorrow’s March for Life. Our message: 1 in 4 abortion patients is Catholic. Stop stigmatizing them. Start listening."

Cardinal Wilton Gregory, Chairman of the National Shrine Board of Trustees, issued a counter statement regarding the Light Show Protest during the Opening Mass of the National Prayer Vigil for Life

Catholics for Choice also said, “Like the majority of Catholics in this country, the so-called ‘March for Life’ does not speak for me. I support abortion access because my Catholic faith teaches that healthcare is a human right, and that includes abortion. It commands me to follow my conscience in all matters of moral decision-making and respect others’ right to do the same." (Source: Catholics for Choice)