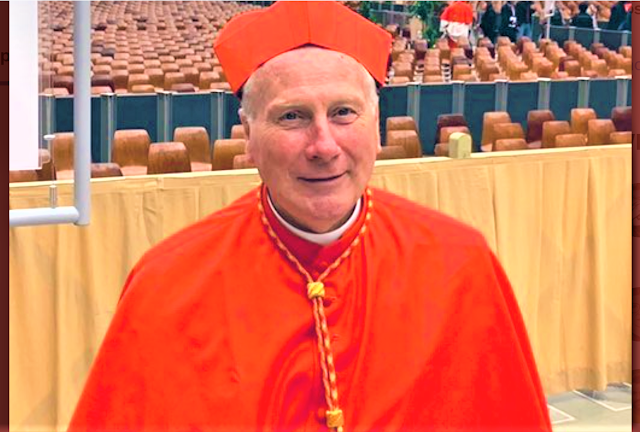 Cardinal Michael Louis Fitzgerald of Liverpool in the United Kingdom has been honored Queen Elizabeth’s New Year’s Honour's List. (See the Full List from the Gov. of the UK : https://assets.publishing.service.gov.uk/government/uploads/system/uploads/attachment_data/file/1044471/new-year-honour-list-2022.pdf)

Cardinal Michael Fitzgerald was awarded an OBE, Officer of the Order of the British Empire, by Queen Elizabeth on December 31st for work in interfaith and interchurch partnerships. Cardinal Fitzgerald is an expert on Christian-Muslim relations. The Archdiocese Tweeted:

Congratulations to Cardinal Michael Fitzgerald who was awarded an OBE for services to interfaith and interchurch partnerships in the New Year's Honours List.

Biography of Cardinal Michael Louis Fitzgerald from the Vatican: M. Afr. Titular archbishop of Nepte, president emeritus of the Pontifical Council for Interreligious Dialogue, was born on 17 August 1937 in Walsall, in the English archdiocese of Birmingham, of Irish parentage.

He was ordained a priest of the Missionaries of Africa (White Fathers) on 3 February 1961, by Cardinal William Godfrey, metropolitan archbishop of Westminster. He was awarded a doctorate in theology from the Pontifical Gregorian University (1965), with a thesis on The missionary intention of the Latin apologists, and a degree in Arabic with honours from the University of London School of Oriental and African Studies (1968).

After teaching for ten years at the Pontifical Institute of Arabic and Islamic Studies (Pisai) in Rome (1968-1978, becoming director in 1972), and at the same time at Makerere University, Kampala, in Uganda (Department of Religious Studies, 1969-1971), he spent two years carrying out pastoral work in Halfa Jedida, in the archdiocese of Khartoum, Sudan.

From 1980 to 1986 he was a member of the general Council of the Missionaries of Africa. Then, on 14 February 1987, he was appointed as Secretary of the Secretariat for non-Christians, of which he served as consultor for a decade, from 1972 to 1982. In the dicastery of the Roman Curia for relations with exponents of other religions – instituted by Paul VI on Pentecost Sunday in 1964, in conformity with the spirit of Vatican Council II and in particular the declaration “Nostra aetate” – he continued to perform this delicate task, even after assuming his current role (1988).

Following his election to the titular see of Nepte on 6 December 1991 by John Paul II, from whom he received episcopal consecration on 6 January 1992 (co-consecrators Archbishop Giovanni Battista Re, substitute of the Secretariat of State, and Josip Uhač, secretary of the Congregation for the Evangelisation of Peoples), on 1 October 2002 he was promoted to the role of president of the Pontifical Council for Interreligious Dialogue and elevated to the dignity of archbishop. In this office he began to sign the annual messages on the occasions of the main feast days of other religions: to Muslims for the end of Ramadan, to Hindus for Diwali, and to Buddhists for Vesakh.

On 15 February 2006, he was appointed by Benedict XVI as apostolic nuncio in Egypt and delegate to the League of Arab States. After ceasing his diplomatic service in October 2012 he settled in the White Fathers community in Saint Anne, Jerusalem. Subsequently, at the end of 2018 he moved to the new house of his congregation in Liverpool, in his native England.

He has been awarded several honours, and is the author of books on dialogue between religions from the Catholic perspective and numerous articles on the subject, published in the magazines “Concilium”, “Islamochristiana”, “Pro Dialogo”, “Gregorianum” and “Origins”.

Created and proclaimed Cardinal by Pope Francis in the Consistory of 5 October 2019, of the Deaconry of Santa Marta in Portico.

Sister Margaret Harlock, of the Congregation of La Retraite, chair of governors at St Brendan’s Sixth Form College, Bristol (MBE for promoting education); was also honored on this year's list.