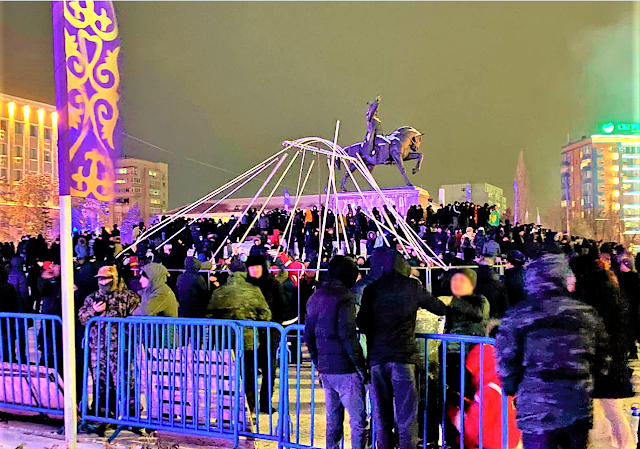 In Kazakhstan on January 2, 2022, following a rise in fuel prices, 164 people including security officials were killed in violent clashes amid antigovernment protests.  The cost of liquefied natural gas (LNG), which is mostly used in cars, doubled from 60 tenge (14 US cents) to 120 tenge per liter.
Auxiliary Bishop Athanasius Schneider of the Archdiocese of St. Mary in Astana said, on Twitter, Catholics are safe from the current violence. “The Catholics in Kazakhstan are thanks to God safe,” Bishop Schneider wrote on Jan. 8.

The Catholics in Kazakhstan are thanks to God safe. In our churches we continue to celebrate the Holy Mass, doing Eucharistic Adoration and praying particularly for peace in our country and for harmony in the social live, which the Kazakh people desire.

“In our churches we continue to celebrate the Holy Mass, doing Eucharistic adoration and praying particularly for peace in our country and for harmony in the social life, which the Kazakh people desire.”
After the recitation of the Angelus prayer, Pope Francis spoke of the victims of protests in Kazakhstan. The Pope said it was with "sorrow" that he heard of the numerous people who died in protests. "I pray for them and their families," continued the Pope, expressing his hope that social harmony might be found through dialogue and justice. Pope Francis  entrusted all the people of Kazakhstan to Mary, Queen of Peace.
Protests began in the city of Zhanaozen and spread to other cities including Almaty, the country’s largest city, business hub and former capital.
The protests displayed grievances against the ruling government of President Kassym-Jomart Tokayev. President Tokayev declared a nationwide state of emergency, said the demonstrations were encouraged by bandits and terrorists with foreign links and ordered security forces to “shoot without warning,” triggering condemnation from the international community and rights groups. About 6,000 people have been arrested amid a security crackdown.
Kazakhstan, a Central Asian country and former Soviet republic, bordering with China and Russia. It has a population of 19 Million people.
Esetok, CC BY-SA 4.0