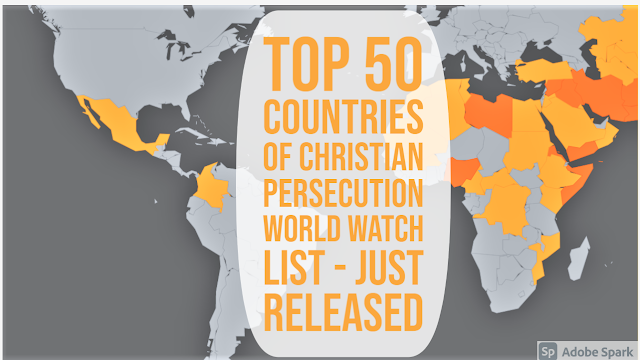 The 2022 World Watch List (WWL) was released on Wednesday, January 19, 2022, by Open Doors International.  WWL examines persecution against Christians and shows that it continues to rise. Four out of the first five countries recording the highest rate of anti-Christian violence are Islamic States. The country with the highest persecution of Christians is Afghanistan (#1).
Then countries in order of high persecution follow:
North Korea, Somalia , Libia, Yemen, Eritrea, Nigeria,  Pakistan,  Iran,  India, Saudi Arabia, Myanmar, Sudan,  Iraq, Syria, Maldives, China, Qatar, Vietnam, Egypt.
Vatican News reported that according to its findings, as analyzed by the independent International Institute for Religious Freedom (IRF), over 360 million people (that is 1 out of 7 globally) endured persecution and discrimination in their country last year. Overall, 5,898 Christians were killed (up 23,8 %  versus 2020), 5,110 churches were attacked or closed (up 13,8 %), 6,175 were Christians arrested without trial (up 44,3%) and 3,829 kidnapped (up 123,9%).
SEE the FULL LIST: https://www.opendoors.org/en-US/persecution/countries/
2022 World Watch List fact sheet
In the 2022 World Watch List (WWL) reporting period (November 2020–September
2021):
• More than 360 million Christians suffer high levels of persecution and/or discrimination for their faith
• In the 2022 WWL top 50 countries alone, 312 million Christians suffer high or
extreme levels of persecution and/or and discrimination for their faith
• That’s 1 in 7 Christians, worldwide, 1 in 5 in Africa, 2 in 5 in Asia and 1 in 15 in
Latin America
Trends
•
Afghanistan is No. 1 on the 2022 World Watch List, the first time in two
decades North Korea hasn’t been number one. This is because of the Taliban
takeover of the country in August 2021, making a deadly situation for Christians
even worse.
•
For the second year in a row, Nigeria was the most violent place in the world
for Christians. Sub-Saharan Africa continues to be the place where the most
Christians are attacked or violently abused for their faith.
•
In countries like China, COVID-19 restrictions have become an easy way to
tighten control and surveillance over religious minorities and worship services.
•
Thanks to the rise of the Taliban and the ongoing threats from groups like Boko
Haram, al Shabab and the Islamic State group, the rise of Islamic extremism
has put millions of Christians at risk in countries on the 2022 World Watch
List. Seven out of the top 10 countries on the 2022 World Watch List experience
some level of Islamic radicalism.
•
More and more Christians are driven out of their homes, communities and
countries. Some remain as IDPs, while others are forced to cross borders and
become refugees.
Violence statistics
•
5,898 Christians killed for their faith
o This is an increase of 24%. Again Nigeria contributed most to the total:
4,650 or 79% of the recorded killings were in Nigeria alone. Pakistan
came second with 11% (620 Christians killed).
•
5,110 churches or Christian building attacked
•
4,765 Christians detained for their faith
•
3,829 Christians abducted for faith-related reasonsCountry statistics:
•
For the first time, Afghanistan is No. 1 on the World Watch List
•
For the first time in 20+ years, North Korea is not at No. 1. However, North
Korea’s persecution score actually rose slightly.
•
Nigeria went up two more spots on the World Watch List because of its rampant
violence impacting Christians.
•
India remained in the top 10 because of its repression of Christian minorities.
•
Myanmar rose six spots to No. 12, largely thanks to the violent military coup that
targeted people around the country, including Christian communities
•
Cuba entered the top 50, thanks to restrictive measures on churches, particularly
Protestant congregations.
•
Saudi Arabia’s score rose to “Extreme” levels, reflecting a reality that any Saudi
who converts to Christianity from Islam is in immediate danger
•
Qatar rose 11 spots on the 2022 World Watch List from last year’s list, primarily
because of an increase in forced church closures. Churches that were forced to
shut during the COVID-19 pandemic have been forced to remain shut even after
other faith communities were allowed to reopen
•
Niger jumped on the list to No. 33, due to a spike in violence and ongoing activity
by radical Islamic extremists
To view the full 2022 World Watch List and methodology, visit
OpenDoorsUSA.org/World-Watch-List.