Miraculous Infant Jesus of Prague History from 1556 - 5 Things to Know and Share! 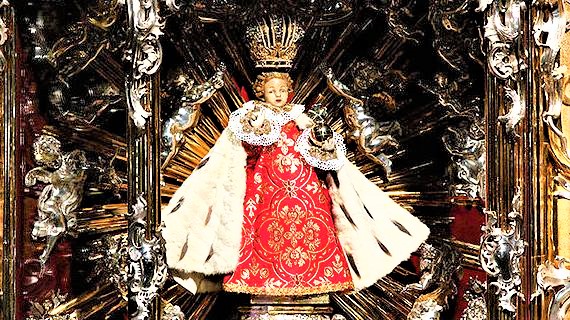 The history of the Miraculous Infant Jesus of Prague dates back more than four hundred years. (A similar statue is honored in the Philippines Nino de Cebu)

SEE ALSO: Novena to the Miraculous Infant Jesus of Prague - A Powerful Prayer to Share! https://www.catholicnewsworld.com/2022/01/novena-to-miraculous-infant-jesus-of.html

1. A statue of The Holy Infant in the guise of a king was brought to Prague, Czechoslovakia, as a precious souvenir of her native country, Spain, by Maria Manriquez de Lara, who in 1556, married Vratislav Pernstyn, a Czech nobleman. According to an old legend, the statue was modeled by a pious friar, to whom its likeness had been revealed in a vision to him by The Holy Infant.

2. The statue is eighteen inches tall and crafted of wax-coated wood. The left hand holds a miniature globe, surmounted by a cross, signifying the world-wide kingship of the Christ Child. The right hand is extended in blessing. The first two fingers are upraised to symbolize the two natures of Christ.

3. The statue of the Holy Infant later became the property of Maria’s daughter Polyxena. Polyxena was married to Duke Wilhelm de Rosenberg, First Lord of the Kingdom, Great Bourgrave of Prague and Knight of the Golden Fleece. After his death, Polyxena married a second time to Baron Zdenek Vojtech Popel de Lobkowitz, Great Chancellor of the Kingdom, Knight of the Golden Fleece, and Prince of the Holy Empire. In 1629, Polyxena resolved to make the statue of the Holy Infant available to all believers, and, consequently dedicated it to the Carmelite Monastery and the adjoining Church of Our Lady of Victories in Prague. She is said to have stated, “I bring you my dearest possession. Honor the Infant Jesus and you shall never want.”
The friars soon acquired a devotion to The Infant Jesus and had recourse to Him in their needs. Many blessings, both material and spiritual, came to the monastery and the friars.
4. During this time, the Thirty Years War was in progress. Prague was under siege several times and finally was overcome and pillaged by the armies of Saxony in 1630. The Carmelites fled and the statue of The Holy Infant was thrown in a storage area behind the main altar of the Church of Our Lady of Victories by the mercenaries who occupied the monastery. Five years later, in 1635, after the Treaty of Prague, the Carmelites returned to Prague and to their monastery at Our Lady of Victories Church. The friars completely forgot about the statue of The Holy Infant and their devotion to The Holy Infant.
5. In 1637, a Father Cyril, who had a great devotion to The Holy Infant, was sent back to the Carmelite Monastery in Prague (he had been one of those who fled in 1630). He found the statue behind the main altar. The hands of the statue had been broken off. It was at this time that the Infant is said to have appeared to Father Cyril and told him,

The last sentence has become the centerpiece of world-wide devotion to The Infant Jesus of Prague. Father Cyril, inspired by the Infant’s guidance, spent many futile attempts to raise the money for the repairs required for the statue of The Holy Infant. He eventually found benefactors who paid not only for the restoration of the statue, but for the construction of a chapel expressly intended for its veneration.

From that time to the present, devotion to The Divine Infant Jesus of Prague has continued and spread throughout the world.