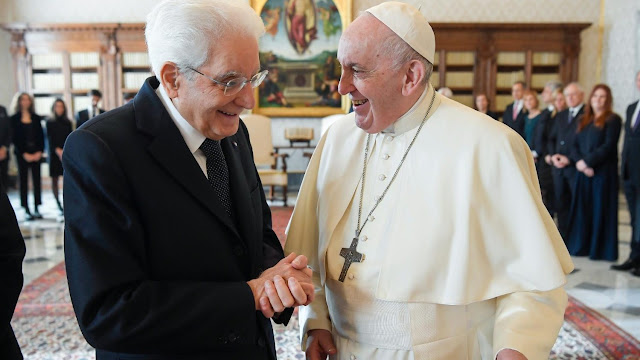 Pope Francis congratulated Sergio Mattarella upon his re-election as Italian President. The Pope sent him a telegram of congratulations describing his service as essential for the unity of the nation.
Vatican News reported that, Pope Francis welcomed the re-election of Sergio Mattarella as President of the Italian Republic with a telegram in which he assures him that his service is more essential than ever to consolidate unity. 80-year-old Mattarella received 759 votes out of a total of 983 voters from the electoral college, far beyond the required quorum of 505, and more than the 665 he received when he was first elected in 2015. He was elected on the 6th day of voting, just days before his seven-year term was due to end on 3 February. In his telegram on Saturday evening, the Pope extended his congratulations to the Head of State for the high office “which he welcomed with a spirit of generous availability.” "In these times characterized by the pandemic," writes Pope Francis, "in which many hardships and uncertainties have spread, especially in the work environment, and fear has increased, along with poverty, which leads to closing in on oneself, your service is even more essential to consolidate unity and transmit serenity to the country. The Pope assured the President of his prayers “so that he may continue to support the beloved Italian people in building an ever more fraternal coexistence and encouraging them to face the future with hope.” (Edited from Vatican News)