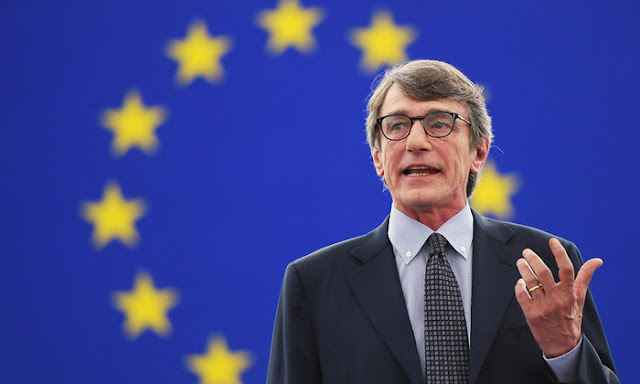 David Sassoli the European Union Parliament President has died at the age of 65. 65-year-old Sassoli became President of the 705-seat European Parliament in July 2019. He was the second Italian president since the assembly was elected by universal suffrage. (Vatican News excerpt) Sassoli had been sick for months after he caught pneumonia caused by the legionella bacteria in September. (Global News)

Published below is the telegram of condolence for the death that took place this night of the Hon. David Sassoli, President of the European Parliament, sent on behalf of the Holy Father Francis, by the Secretary of State Pietro Parolin to his wife, Mrs. Alessandra Vittorini:

ROME The Holy Father, Spiritually close in this moment of pain for The Premature passing of the dear spouse, Honorable David Sassoli, President of the European Parliament, Wishes To Bring His wife and the children Livia and Julius, ensuring participation in the serious mourning that happens Italy and the European Union. He remembers him as an animated Believer of Hope And Charity, Competent Journalist and Established Man of Institutions who, in a Peaceful And Respectful Way, in the Public Responsibilities Covered has Worked Out For The Common Good with Rightness and Generous Commitment, Promeness Solidarity Vision of The European Community And Dedicating With Particular Care to the last. Pope Francis, While Raising Suffrage Prayers,

CARDINAL PIETRO PAROLIN,
SECRETARY OF STATE OF HIS HOLINESS

On behalf of the Bishops of European Union, the President of COMECE, H.Em. Card. Jean-Claude Hollerich SJ, expresses deep sorrow at the death of David Sassoli, President of the European Parliament, which was announced on Tuesday 11 January 2022.
image
“I am deeply saddened to hear about the passing of the President of the European Parliament, David Sassoli. He was a man of values and dialogue, with a great sense of duty, who worked for the common good as a journalist and as an EU leader to improve the democratic institutions and bring them closer to the European citizens.

Since his election as President of the European Parliament in 2019, Sassoli has accompanied the work of the European institutions on crucial topics such as youth empowerment, the fight against poverty, the recovery from the pandemic and the Conference on the Future of Europe.

As sad as the news of his death is, I am sure that his qualities as a devoted public servant have not gone unnoticed by many young Europeans, who will not only remember him but also continue his legacy in favour of democracy and solidarity.

On behalf of the Bishops of COMECE, I would like to offer my most sincere condolences to the family, friends, colleagues of President Sassoli. At this difficult moment, we mourn this remarkable Italian and proud European. May he rest in peace.”
COMECE