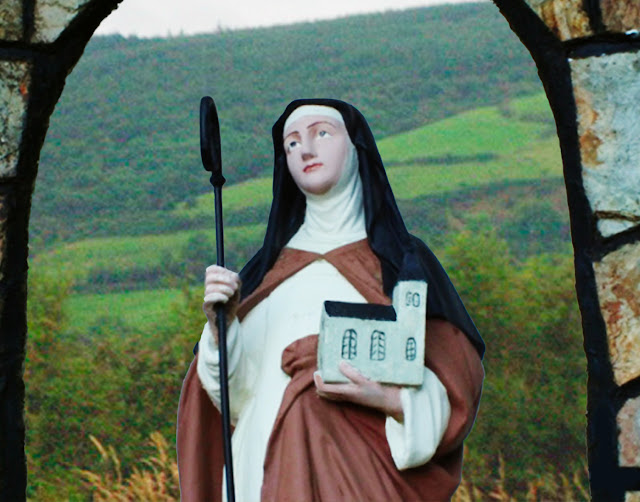 Born:
475, County of Waterford, Ireland
Died:
15 January 570
Patron of:
Diocese of Limerick, Ireland
St. Ita, baptized Deidre, was born of a Christian family about 475 A.D. near the present city of Waterford, Ireland. She was the daughter of the chieftain Confhaola and of Necta who claimed royal descent from Feighlim Reachtmhar, King of Tara.
From early on, Deirdre was said to embody the six virtues of Irish womanhood — wisdom, purity, beauty, music, sweet speech and embroidery. She was described as “sweet and winning in her address, prudent in word and work and constant in mind and firm of purpose.”
This last virtue of “being firm of purpose” stood to her when it came to making decisions about her life’s work.
Her parents hoped she would marry a nobleman of another clan; Deidre wanted to serve God in religious life. To overcome her parents' resistance to her chosen path, she fasted and prayed for three days and three nights, and on the third night, God revealed a message to her father in his sleep. The next morning, Conflhaola gave Deidre his blessing to follow her calling. At the age of sixteen, Deidre received the monastic habit of a nun and took the name of Ita. The name Ita is said to come from the Irish word iota, meaning thirst for holiness.
Ita then set out for Limerick, possibly in the company of her sister Fiona, who was later to become a nun in the community at Killeedy. Ita settled at Cluain Credall where there was a spring well - now a holy well - on the site of what later became a church. She turned down offers by the people and king of Ui Chonaill to take over all the lands of the area and settled instead for four small divisions of land to provide her small community with food.
The initial settlement later became known as Cill Ide or Killeedy (Ita's cell) and prospered as a center of learning and spiritual formation, drawing men and women from as far away as the Midlands. Children came, too, for this was still the age of fosterage in the old Gaelic tradition. One of the most famous of her pupils is said to be St. Brendan, the Navigator or Voyager of Clonfert. Among many others, the great Saint Columban came to Ita for counsel and guidance in the problems of his apostolate. It is thought that Ita was a contemporary of Saint Patrick as well.
Legend has it that Brendan asked Ita the three things which she thought God loved most. She said: "True faith in God with a pure heart, a simple life with a grateful spirit, and openhandedness to the poor inspired by charity." The three things that most displease God are: "a mouth that hates people, a heart harboring resentments and confidence in wealth.
Her life was spent mainly at Cill Ide, and, according to Sr. Declan Power, hers was a life based on penance, asceticism, vigils, fast and prayer. She was said to have special devotion to the infant Jesus and to have sung the Irish lullaby, Losagan, to mark that special love.
St. Ita, sometimes called "the white sun of the women of Munster" or the "Brigid of Munster," died on January 15, 570 A.D. and was laid to rest in her own Pobal Ide, where countless generations have come to pray.