Saint January 21 : St. Agnes a Virgin who is Among the Women Mentioned in the Roman Canon of the Mass 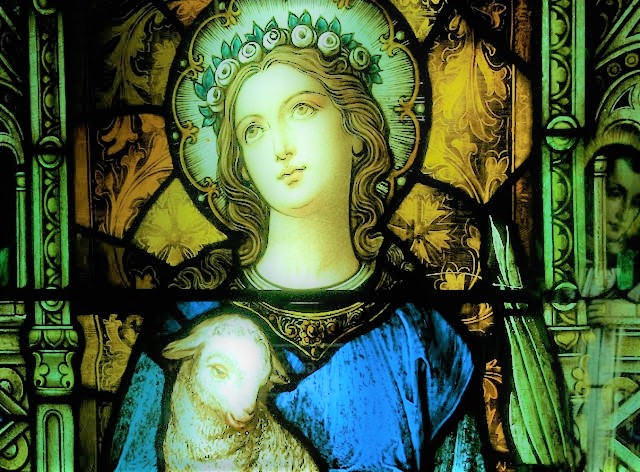 Born: 291
Died:
304
Major Shrine::
Church of Sant'Agnese fuori le mura and the Church of Sant'Agnese in Agone, both in Rome
Patron of:
Betrothed couples; chastity; Children of Mary; Colegio Capranica of Rome; crops; gardeners; Girl Scouts; girls; rape victims; virgins
Of all the virgin martyrs of Rome none was held in such high honour by the primitive church, since the fourth century, as St. Agnes. In the ancient Roman calendar of the feasts of the martyrs (Depositio Martyrum), incorporated into a collection dating from 354. Since the close of the fourth century the Fathers of the Church and Christian poets have sung her praises and extolled her virginity and heroism under torture.
Saint Agnes is also known as Agnes of Rome, Ines, Ines del Campo, and Ynez. The name “Agnes” is similar to the Latin word agnus, which means “lamb”.
For this reason depictions of Saint Agnes often include a lamb. The name actually comes from a Greek word which means “chaste, pure, sacred”.
Agnes is one of the “virgin martyrs” of the church of Rome. She is one of seven women, in addition to the Blessed Virgin Mary, who are mentioned in the Roman Canon of the Mass (Eucharistic Prayer I). Saints Felicity, Perpetua, Agatha, Lucy, Cecilia, and Anastasia are the other six.
There are a diversity of accounts of her martyrdom (by fire, or sword) from very early on, and so it is hard to know much with certainty. The historical record of the specific circumstance/reasons for her martyrdom is also unclear. Most date her martyrdom to the year 304 under the Emperor Diocletion, but the evidence again is not unanimous. All sources seem to agree that she was very young, 12-13 years old, when she was martyred, in the late 3rd or early 4th century. It is the tradition that she was martyred on January 21, and so her feast day is January 21. It was the custom in the early church to commemorate martyrs on the day of their birth into eternal life. However, her regular birthday, January 28 has also been commemorated in our church’s history.
The bones of Saint Agnes are preserved in the Church of Sant’Agnese Fuore le Mura (Saint Agnes Outside the Walls) in Rome. This church was built over the catacombs that were constructed around the tomb of Saint Agnes. Her skull is preserved in a side chapel of the Church Sant’Agnese in Agone (Saint Agnes in Agony) which is in Rome’s Piazza Navona. The Fountain of the Four Rivers is immediately in front of the church. Sources: Catholic Encyclopedia and https://saintagnes.com/who-was-saint-agnes/
________________________________ __________________________
Prayer in Honor of St. Agnes
O Sweetest Lord Jesus Christ, source of all virtues, lover of virgins, most powerful conqueror of demons, most severe extirpator of vice! deign to cast Thine eyes upon my weakness, and through the intercession of Mary most blessed, Mother and Virgin, and of Thy beloved spouse St. Agnes, glorious virgin and martyr, grant me the aid of Thy heavenly grace, in order that I may learn to despise all earthly things, and to love what is heavenly; to oppose vice and to be proof against temptation; to walk firmly in the path of virtue, not to seek honors, to shun pleasures, to bewail my past offenses, to keep far from the occasions of evil, to keep free from bad habits, to seek the company of the good, and persevere in righteousness, so that, by the assistance of Thy grace, I may deserve the crown of eternal life, together with St. Agnes and all the saints, forever and ever, in Thy kingdom. Amen. (Indulgence 100 days, Pius IX, 1854)