Saint January 29 : St. Pope Gelasius II who was a Benedictine Monk and only a Deacon when Elected as Pontiff 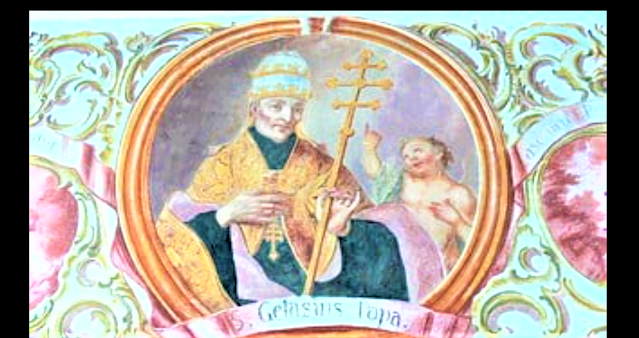 Born at Gaeta, year unknown; elected 24 Jan., 1118; died at Cluny, 29 Jan., 1119. No sooner had Paschal II ended his stormy pontificate, than the cardinals, knowing that the emperor, Henry V, had concerted measures with a faction of the Roman nobility to force the selection of a pliant imperial candidate, met secretly in a Benedictine monastery on the Palatine. Having dispatched a messenger to Monte Cassino, to summon the aged chancellor, Cardinal John of Gaeta, they turned a deaf ear to his entreaties and unanimously declared him pope.

John was of a noble family, probably the Gaetani. Early in his life he entered the monastery of Monte Cassino, where he made such progress in learning and became so proficient in Latin, that, under successive pontiffs, he held the office of chancellor of the Holy See. He was the trusted advisor of Paschal II; shared his captivity and shielded him against the zealots who charged the pope with heresy for having, under dire compulsion, signed the "Privilegium", which constituted the emperor lord and master of papal and episcopal elections (see PASCHAL II and INVESTITURES). When the news spread that the cardinals had elected a pope without consulting the emperor, the imperialist party broke down the doors of the monastery; and their leader, Cenzio Frangipani, seized the new pontiff by the throat, cast him to the ground, stamped on him with spurred feet, dragged him by the hair to his neighbouring castle, and threw him, loaded with chains, into a dungeon. Indignant at this brutal deed, the Romans rose in their might; and, surrounding the robber's den, demanded the instant liberation of the pontiff. Frangipani, intimidated, released the pope, threw himself at his feet, and begged and obtained absolution. A procession was formed, and amidst shouts of joy Gelasius II (so he termed himself) was conducted into the Lateran and enthroned.

The triumph was of short duration; for, 2 March, the formidable figure of Henry V was seen in St. Peter's. As soon as he had heard of the proceedings at Rome, he left his army at Lombardy and hastened to the capital. Gelasius immediately determined upon flight. On a stormy night, the pope and his court proceeded in two galleys down the Tiber, pelted by the imperialists with stones and arrows. After several mishaps Gelasius at length reached Gaeta, where he was received by the Normans with open arms. Being only a deacon, he received successively priestly ordination and episcopal consecration. Meanwhile, the emperor, ignoring the action of the cardinals, placed on the throne of St. Peter a senile creature of royal power, Maurice Burdinus, Archbishop of Braga in Portugal, who had the audacity to take the venerated name of Gregory. Gelasius pronounced a solemn excommunication against both of them; and as soon as the emperor, frustrated of his prey, left Rome, he returned secretly; but soon took the resolution of taking refuge in France. He went by way of Pisa, where he consecrated its splendid marble cathedral, and Genoa. He was received by the French with the utmost reverence. The powerful minister of Louis VI, the Abbot Suger, conducted him to the monastery of Cluny. Gelasius was perfecting plans for the convocation of a great council at Reims, when he succumbed to pleurisy, leaving the consummation of the fifty years' war for freedom to his successor, Callistus II.

Baronius and Reumont agree in pronouncing that no historical personage ever compressed so many misfortunes into the short space of a year and five days. There seems to be no reason why the Benedictine Order should not take up his case for canonization. Benedict XIV tells us ("De Beat. et Canon.", I, xli, n. 30) that in his time the question was mooted; but for one reason or another it was overlooked. The life of Gelasius was written by his  friend, Pandulphus of Pisa, an eye-witness to what he narrates; it is in Muratori, "Rer. ital. Scr.", III, 1 sqq.