Saint January 31 : Blessed Maria Cristina of Savoy the Queen of the 2 Sicily's who Died as a Result of Childbirth 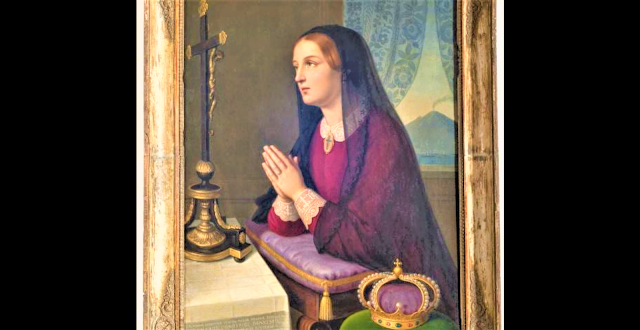 Maria Cristina of Savoy (Maria Cristina Carlotta Giuseppa Gaetana Efisia; 14 November 1812 – 21 January 1836) was the first Queen consort of Ferdinand II of the Two Sicilies. She died as a result of childbirth. She is venerated in the Catholic Church, having been beatified by Pope Francis.

Maria Cristina was the youngest daughter of King Victor Emmanuel I of Sardinia and Archduchess Maria Teresa of Austria-Este.

On 21 November 1832, Maria Cristina married Ferdinand II of the Two Sicilies. The bride was twenty years old and the groom twenty-two.

Maria Cristina was described as beautiful but also timid and shy: modest and reserved, she was never comfortable at the royal court. Her relationship to Ferdinand was not happy, and he had little patience for her nervous modesty.

She died at the age of 23, after having given birth 5 days before to her only child, Francis II of the Two Sicilies.

On 10 July 1872 she was declared to be a Servant of God, on 6 May 1937 a Venerable Servant of God, and on 3 May 2013 Pope Francis authorized a decree recognizing a miracle due to her intercession, a further stage on her process to beatification. Her beatification took place on 25 January 2014 at the Basilica of Santa Chiara (Naples), where she is buried, making her Blessed Maria Cristina of Savoy.