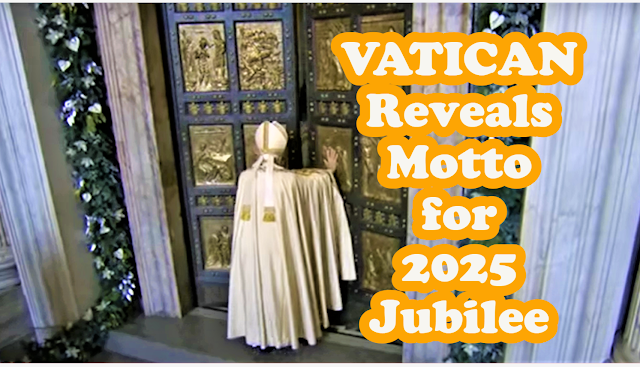 The Vatican has released that the President of the Pontifical Council for Promoting the New Evangelization, revealed the motto for the 2025 Jubilee Year.
After an audience with Pope Francis on 3 January, Archbishop Rino Fisichella said that during the meeting the Pope approved the motto proposed for the upcoming Jubilee Year, a motto he said, “that can be summed up in two words: Pilgrims of hope."
Archbishop Fisichella explained that, like for any motto, it attempts to condense the meaning of the entire Jubilee journey. He notes that the chosen words – pilgrims and hope – both represent key themes of Pope Francis' pontificate.
"There is so much work to be done" in these two years, he said, referring in particular to the Dicastery that he heads and that is entrusted with the organizational responsibility for the event.
The need, he stressed, is to have a "solid preparatory impact" in order to create an efficient organizational machine.
"To activate it completely I am waiting for further indications from the Pope," Archbishop Fisichella added, although work has already begun. One of the priorities concerns the reception of pilgrims and the faithful, with a large number of pilgrims expected in Rome during the Holy Year - in the hope that in the next two years the health emergency will no longer affect activities as it does today.
He confirmed that collaboration with “the Municipality of Rome, with the Lazio Region authorities, and with the Italian government” is in full swing so that everything can take place securely and in line with the city’s capacity to receive visitors in the best possible way."
The Jubilee Year
Following the extraordinary 2015 Holy Year of Mercy instigated by Pope Francis, the forthcoming Jubilee will take place in line with the norm of leaving a 25-year gap between each one. The most recent ordinary jubilee took place in the year 2000, as the world and the Catholic Church prepared to enter the new millennium.
The Jubilee Year is a special year of grace, in which the Church offers the faithful the possibility of obtaining a plenary indulgence. Traditionally, it begins just before Christmas and ends on the Epiphany of the following year.
The Pope inaugurates the Holy Year with the rite of the opening of the Holy Door in St. Peter’s Basilica. After that, the Holy Doors of the other papal basilicas – St John Lateran, St Paul Outside the Walls, and St Mary Major – are opened and remain so until the end of the Jubilee Year.
Edited from Vatican News.va
Some History on the Holy Door:
https://www.vatican.va/news_services/liturgy/documents/ns_lit_doc_14121999_porta-santa_en.html