VIDEO of Pope Francis' Surprise Visit to Record Store in Rome with his Fiat for a Blessing! 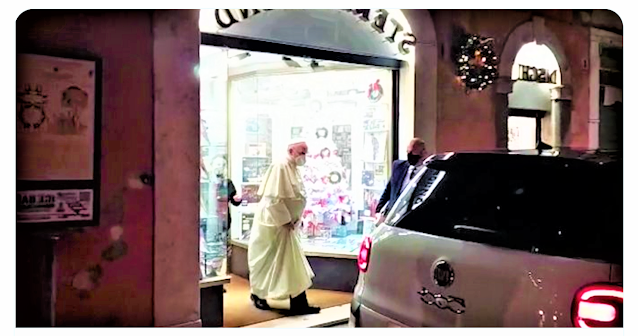 A surprise visit to a music store by Pope Francis was reported by Romereports. Vatican News explained that around 7 pm on Tuesday, January 11th in a white Fiat 500L the Pope entered the store. The shop had been recently renovated. During the visit, according to those present, a small crowd had gathered, ready to film the Pope's exit with their smartphones.  Pope Francis could be seen blessing Letizia, the elderly owner, her son-in-law and her daughter. The shop-owner's daughter presented the Pope with a gift, wrapped in blue paper: a 33 rpm record of classical music. The shop is called "Stereosound", in the city center, and the owners are longtime friends of the Pope. The owner said the Pope came there already when he was a cardinal.
He had promised them to return to see them as Pope: today he succeeded, to the joy of the owners of the Via Minerva business. Pope Francis blessed the establishment. The visit lasted about twelve minutes in all, and the shopkeepers gave him a disc of classical music. The pope then got back into a Fiat 500 and returned to the Vatican.
The Spanish reporter Javier Martínez-Brocal, director of the Rome Reports agency, noticed the Pope leaving the «Stereosound» shop with a 33 rpm under his arm, who published the photo (screenshot) on the his Twitter profile.
The owner of "Stereosoud" told Corriere della Sera that it was "an immense emotion", a surprise visit from Francis: "The Holy Father is passionate about music and was already our customer, years ago, when he was still cardinal and passed through Rome. Then, of course, we never saw him again. And now he came to visit us, to say hello ... the record? It's a gift we gave him, a classical music record… ».
"He frequented the area staying in the Clergy House in via della Scrofa", Vatican News recalls.
Sources: Vatican News, Rome Reports and https://www.famigliacristiana.it/articolo/il-papa-a-sorpresa-va-in-un-negozio-di-dischi-a-roma-vicino-al-pantheon.aspx