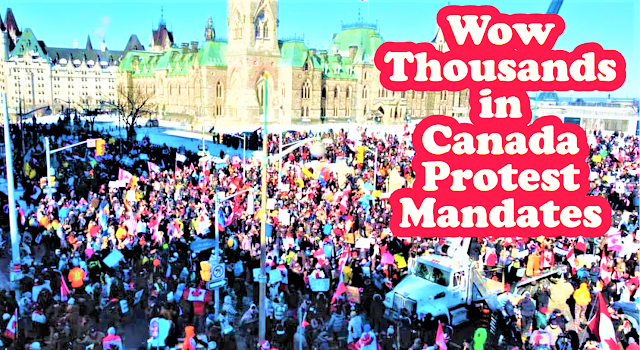 Freedom Convoy 2022 is an ongoing protest conducted by truck drivers and supporters in Canada against COVID-19 vaccine requirements introduced by the Government.

Thousands of people have joined this protest from the US and Canada. It has now gone beyond just the truckers but has become a general protest against the government vaccine mandates. The police have not arrested anyone but are trying to assure security in the area. The trucks are parked on the main street in front of the parliament buildings and are not moving.

There were prayer rallies held on Sunday with members of Indigenous and various Christian denominations (including a rosary). Image below from Freedom Convoy 2022 Support Group 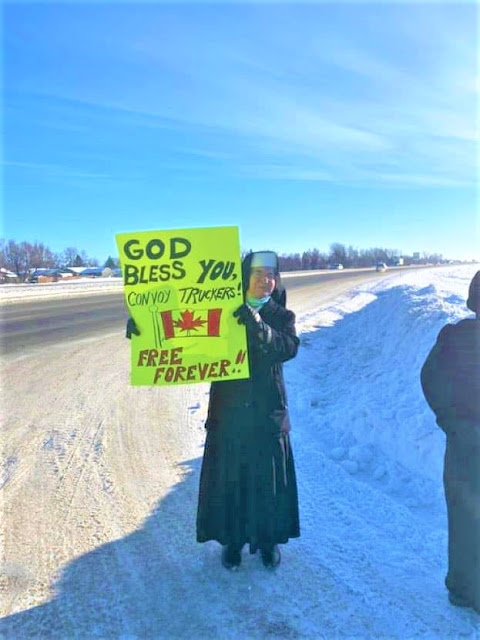 The truck convoys and public converged on Ottawa on January 29, 2022, with a rally planned at Parliament Hill. Fundraising was organized by Tamara Lich.

1. As of Monday, January 31, 2022 the Gofundme Account for the Trucker had reached over $9 Million. See: https://www.gofundme.com/f/taking-back-our-freedom-convoy-2022

2. A recent poll shows that a Majority (54%) now say they want all restrictions to end – increase of 15-points since early January. (See link from Angus Reid at bottom)

3. Before January 15, 2022, truck drivers and other essential workers had been exempt from the two-week quarantine for unvaccinated travellers crossing Canada's borders. The exemption's abolition has been criticized by some politicians and truckers for having the potential to exacerbate the supply chain disruptions already experienced in Canada. The Canadian Trucking Alliance estimates that 85% of the 120,000 Canadian truck drivers are already vaccinated against COVID-19, and that the mandates would impact 26,000 of the 160,000 drivers in both countries who regularly cross the border.

4. The movement is supported by several Conservative politicians. (See quotes below)

5. After some incidents finding Nazi and confederate flags MP Pierre Poilievre explained on Twitter: "People flying evil confederate or Nazi flags or disrespecting monuments are individually responsible for reprehensible acts. They do not represent the thousands of lawful truckers who are actually part of the protest and are peacefully championing their livelihoods & freedoms."

What prompted the Original Protest?

On November 19, 2021, the Public Health Agency of Canada announced upcoming adjustments to Canada's border measures. Included in the announced adjustments was the requirement for essential service providers, including truck drivers, to be fully vaccinated after January 15, 2022. When asked in the House of Commons to produce data linking truckers to COVID-19 infections in Canada, neither the minister of health Jean-Yves Duclos nor the chief public health officer Theresa Tam were able to do so. As well, the announced adjustments clarified that unvaccinated or partially vaccinated foreign national truck drivers would be prohibited from entering Canada after that date. The United States Department of Homeland Security (DHS) previously announced on October 29, 2021, that proof of vaccination would be required to enter the United States starting in January 2022.

Garnett Genuis, a Conservative Catholic MP from Alberta, declared his support for the action, calling to immediately end the "nonsensical vaccine vendetta".

Freedom Convoy's spokesperson Ben Dichter stated on Fox News that "We want to get rid of the vaccine mandates and the (vaccine) passports. And that passport, that's the really concerning one".

One of the groups associated with the protest, Canada Unity, put out a memo on January 25, 2022 calling all levels of government cease all vaccine mandates, reemploy all employees terminated due to vaccination status and rescind all fines imposed for non-compliance with public health orders.

The first convoy departed Prince Rupert on January 22, arriving in Prince George in the evening. The following day, another convoy left from Delta with supporters gathering along Highway 1, the Trans-Canada Highway.

On January 29, the first day of protest at Parliament Hill, Prime Minister Justin Trudeau was moved to an undisclosed location due to security concerns.

On January 30, Ottawa Police launched a criminal investigation into the desecration of the National War Memorial and statue of Terry Fox. They would also be investigating “threatening/illegal/intimidating behaviour” toward police officers, workers and other private citizens.

This has caused organizer Tamara Lich to address convoy members and denounce political violence, saying that protesters should "hold a peaceful protest" instead.

Candice Bergen, the Deputy Leader of the Opposition, released a written statement supporting the truckers' peaceful demonstrations against the mandates.

Andrew Scheer, former leader of the Conservative Party of Canada and MP of Regina—Qu'Appelle in Saskatchewan declared his support for the protest when it drove through Regina.

Scott Moe, Premier of Saskatchewan, issued a letter on January 29 in support of the protest. Although repeatedly encouraging vaccination, Moe stated that he did not support the cross-border vaccine mandate because vaccination does not prevent being infected by or transmitting COVID-19 (a statement that was subsequently disputed by multiple provincial doctors), and pledged that he would lift proof of vaccination requirements in Saskatchewan "in the not too-distant future" for that reason.