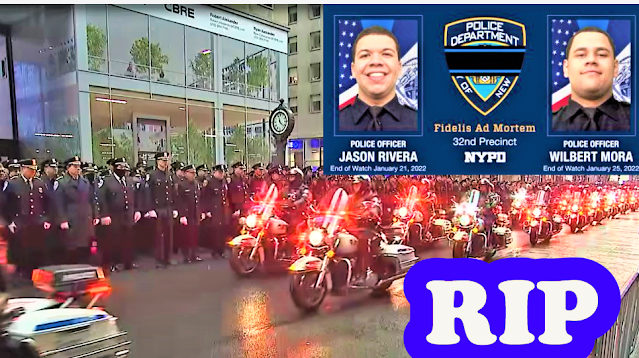 Two police officers died from gun shot wounds after responding to a 911 in Harlem, New York, USA. A unimaginable sea of blue lined the streets of New York for the funeral (see videos below).
Jason Rivera, at only 22-years-old, was shot on January 21, 20221 along with his partner Wilbert Mora, age 27. Rivera died that same evening and Mora four days later.
Commissioner Sewell Tweeted: "Police Officer Jason Rivera rose to every challenge that crossed his path. He was everything that the city and NYPD needed him to be. It is with sincere admiration and appreciation that I promote him to Detective First Grade."
On the day of Rivera's Catholic funeral, thousands of police officers lined the streets beside Saint Patrick's Cathedral in honor of the 2 officers. Cardinal Dolan presided over the funeral on January 28th.
(Moving Testimony of Jason's Wife at 1:56:00 Mark)
"Wilbert Mora was a hero. He served his city, protected his community and gave his life for our safety," N.Y.C. Mayor Eric Adams wrote in a tweet Tuesday.  Rivera, who was appointed to the NYPD in November 2020, was assigned to the 32nd Precinct eight months ago, in May 2021.  47-year-old Lashawn J. McNeil, who killed the officers, was fatally shot by a third officer at the scene.

A sea of blue lined Fifth Avenue shoulder-to-shoulder with fellow first responders from around the country as we rendered a final salute to Detective Jason Rivera. With tears in our eyes we bid farewell and make a solemn vow to #NeverForget his legacy and sacrifice to this city. pic.twitter.com/b47PwFCKUY

“Scripture states, ‘Greater love hath no one than this: that a man lay down his life for his friends.’ That’s just what Jason did.”