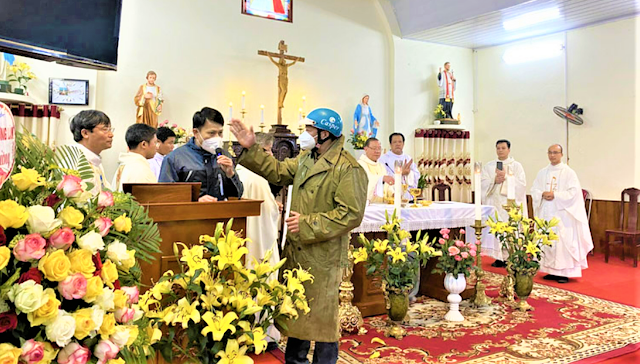 A Sunday Holy Mass celebrated by Archbishop Giuse (Joseph) Vũ Văn Thiên of Hanoi, Vietnam, was disrupted last Sunday by government officials, VietCatholic reported. The incident, occurred in the largest church in Vu Bản, Hòa Bình province, with government officials wearing helmets, led by the head of the local section of the Communist Party, who moved to the altar.
Archbishop Vũ Văn Thiên was conducting the 10 am Mass at time, celebrating the archdiocese’s Mission Day. The officials shouted at the archbishop to immediately stop the liturgy and disperse the faithful. The faithful tried to protect the archbishop and removed the trespassers from the church, VietCatholic reports. After the men left, the Mass resumed, but the local Catholics were left in shock. “This is the first time I’ve ever seen local government officials approach the altar to disrupt the Holy Mass without even waiting for it to end before harassing priests as they used to do in the past. For the first time we see them addressing priests with violence, disrespecting sacred ministers. This is a brutal and illegal action. This is blasphemy and blatant sacrilege"” said Fr Peter Nguyen Van Khai, a former spokesman for the Redemptorists.
Agenzia Fides reported: "It was rather unpleasant and worrying to see the liturgy interrupted by the presence of several state officials", said a note from the Archdiocese of Hanoi, referring to the I outrage expressed by the local community. Plainclothes security officers interrupted the liturgical service. Led by the head of the local branch of the Communist Party, they marched to the altar, ordering the Archbishop in an altered voice to immediately stop the liturgy and disperse the assembly. It was not clear why government officials intervened and interrupted the mass. Archbishop Joseph was celebrating the Eucharist on the seventh Sunday in Ordinary Time with other diocesan priests on the special occasion of the "Archdiocesan Mission Day". Concelebrants and parishioners did their best to protect Archbishop Joseph and asked the officials to leave the church, allowing the liturgy to end. After this unfortunate incident, the Holy Mass resumed, even though the assembly was stunned and shaken. Catholics in Hanoi and believers of other religions in Vietnam have condemned this flagrant violation of human rights and freedom of worship.
Edited from Fides.org - AsiaNews.it - VietCatholic - Image Screenshot - AsiaNews/Fides