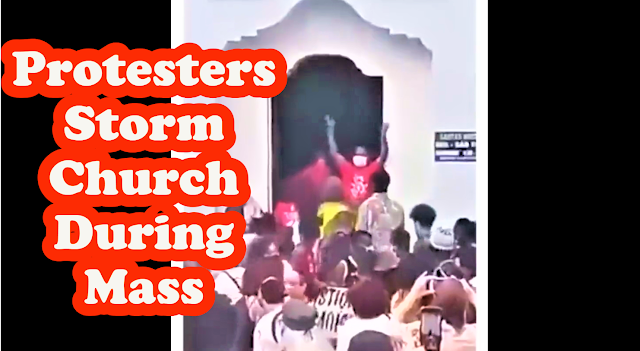 Members of the Brazilian Communist Party (PCB) and the Workers Party (PT) stormed the Church of the Rosary in Curitiba, Paraná in Brazil during Mass. In protest of the death of two Afro-Brazilians. These were a 24-year-old Congolese immigrant named Moïse Kabagambe who was beaten to death after he asked for unpaid wages. The second was Durval Teófilo Filho, a African-Brazilian, who was killed outside his home in São Gonçalo after someone thought he was a thief.

On February 5, 2022, around 5:00 pm, a group showed up at the door of the Rosário Church, to protest against the violence in the state of Rio de Janeiro, whose final outcome was the death of a Congolese citizen. and, in another case, the death of an Afro-descendant Brazilian. It was at the same time as the celebration of Mass. Asked not to disrupt the liturgical moment, leaders of the group urged invasive, disrespectful and grotesque behavior.

It is true that the racial issue in Brazil still requires a lot of reflection and honest analysis, which promote public policies with a view to contemplating the equal rights of all. But it is no less true that justice and peace will never be achieved with intemperance or unbalanced impulsivity.

Since its first inauguration, in 1737, the Our Lady of the Rosary dos Pretos Church has always been a place of veneration and celebration of the faith. It was the slaves who built it. Today, many Afro-descendants visit it. And they do it in groups or individually. They always excelled in deep respect, even when they were not Catholics.

Unfortunately, what happened last Saturday was aggression and insults. It's easy to see who stimulated them.

The position of the Archdiocese of Curitiba is one of repudiation in the face of injurious desecration. The Law and free citizenship were also attacked. On the other hand, it is not intended to “politicize”, “partisanize” or exacerbate reactions. Confrontations are not peacemakers. What is now wanted is to safeguard the dignity of the wonderful, and also painful, history of that Temple.