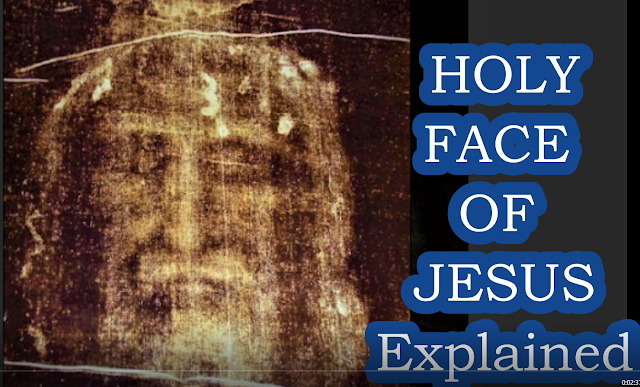 The Holy Face Of Jesus Devotion honors the Face of Jesus.  It's feast day is celebrated on Shrove Tuesday or the day before Ash Wednesday. On Tuesday, March 1st, in 2022.

A Catholic Nun promoted this devotion after she received visions of Jesus saying:

"I firmly wish that my face reflecting the intimate pains of my soul,  the suffering and love of my heart,  be more honoured!  Whoever gazes upon me already consoles me. "

(Pictured above,  is the most famous image of the face of Jesus,  that comes from the Shroud of Turin.  It is believed,  that this image,  depicts Jesus from the fabric of the burial shroud,  in which he was wrapped after his crucifixion.)

SEE ALSO :
Powerful Prayers to SHARE to the Holy Face of Jesus with Novena, Litany and Promises - Feast on Shrove Tuesday - https://www.catholicnewsworld.com/2021/02/powerful-prayers-to-share-to-holy-face.html

Sister Mary of Saint Peter (French: Marie de Saint Pierre) lived from 1816 to 1848. She was a Discalced Carmelite nun who lived in Tours,  France.  From 1844 to 1847, our Lord spoke to her about spreading throughout the world,  the devotion to His Most Holy Face.  He also revealed to her,  in particular,  that God the Father was greatly offended by sin,  especially by the widespread violation of the first three of the Ten Commandments. .  Through this work of reparation to the Holy Face,  God’s justice would be disarmed.  He promised to imprint His divine likeness on the souls of those who honor His most holy face,  and He further promised,  that all who would defend His cause in the Work of Reparation by words,  by prayers,  or in writing,  will be defended by Him before His Father.

“Those who by words,  prayers or writing defend My cause in this Work of Reparation I will defend before My Father,  and will give them My Kingdom. ”

Our Lord Himself told Sister Mary of Saint blasphemy is a poisoned arrow continually wounding His divine Heart. ” Then,  He gave her the following powerful prayer,  called the Golden Arrow,  saying that those who would recite would make up for this sin.

May the most holy,  most sacred,  most adorable,  most incomprehensible,  and ineffable Name of God be forever praised,  blessed,  adored,  loved,  and glorified,  in heaven,  on earth,  and under the earth, * by all the creatures of God,  and by the Sacred Heart of Our Lord Jesus Christ in the most Holy Sacrament of the Altar.  Amen.

She saw many graces flowing from Jesus,  by this prayer.  This is another prayer honoring the Holy Face that can be recited daily;

Eternal Father,  I offer Thee the Adorable Face of Thy Beloved Son,  for the honor and glory of Thy Holy Name,  for the conversion of sinners and for the salvation of the dying.  Amen.