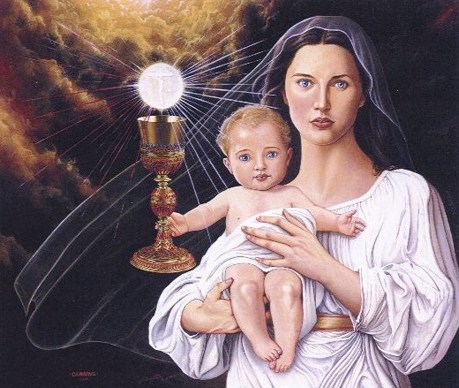 Saturday of the Fifth Week in Ordinary Time
Lectionary: 334
Reading I
1 Kgs 12:26-32; 13:33-34
Jeroboam thought to himself:
“The kingdom will return to David’s house.
If now this people go up to offer sacrifices
in the temple of the LORD in Jerusalem,
the hearts of this people will return to their master,
Rehoboam, king of Judah,
and they will kill me.”
After taking counsel, the king made two calves of gold
and said to the people:
“You have been going up to Jerusalem long enough.
Here is your God, O Israel, who brought you up from the land of Egypt.”
And he put one in Bethel, the other in Dan.
This led to sin, because the people frequented those calves
in Bethel and in Dan.
He also built temples on the high places
and made priests from among the people who were not Levites.
Jeroboam established a feast in the eighth month
on the fifteenth day of the month
to duplicate in Bethel the pilgrimage feast of Judah,
with sacrifices to the calves he had made;
and he stationed in Bethel priests of the high places he had built.
Jeroboam did not give up his evil ways after this,
but again made priests for the high places
from among the common people.
Whoever desired it was consecrated
and became a priest of the high places.
This was a sin on the part of the house of Jeroboam
for which it was to be cut off and destroyed from the earth.
Responsorial Psalm
106:6-7ab, 19-20, 21-22
R.        (4a) Remember us, O Lord, as you favor your people.
We have sinned, we and our fathers;
we have committed crimes; we have done wrong.
Our fathers in Egypt
considered not your wonders.
R.        Remember us, O Lord, as you favor your people.
They made a calf in Horeb
and adored a molten image;
They exchanged their glory
for the image of a grass-eating bullock.
R.        Remember us, O Lord, as you favor your people.
They forgot the God who had saved them,
who had done great deeds in Egypt,
Wondrous deeds in the land of Ham,
terrible things at the Red Sea.
R.        Remember us, O Lord, as you favor your people.
Alleluia
Mt 4:4b
R. Alleluia, alleluia.
One does not live on bread alone,
but on every word that comes forth from the mouth of God.
R. Alleluia, alleluia.
Gospel
Mk 8:1-10
In those days when there again was a great crowd without anything to eat,
Jesus summoned the disciples and said,
“My heart is moved with pity for the crowd,
because they have been with me now for three days
and have nothing to eat.
If I send them away hungry to their homes,
they will collapse on the way,
and some of them have come a great distance.”
His disciples answered him, “Where can anyone get enough bread
to satisfy them here in this deserted place?”
Still he asked them, “How many loaves do you have?”
They replied, “Seven.”
He ordered the crowd to sit down on the ground.
Then, taking the seven loaves he gave thanks, broke them,
and gave them to his disciples to distribute,
and they distributed them to the crowd.
They also had a few fish.
He said the blessing over them
and ordered them distributed also.
They ate and were satisfied.
They picked up the fragments left over–seven baskets.
There were about four thousand people.
He dismissed the crowd and got into the boat with his disciples
and came to the region of Dalmanutha.
People who cannot communicate now make Spiritual Communion :
At your feet, O my Jesus I bow down and offer you the repentance of my contrite heart, which abysses itself into its nothingness and Your holy presence. I adore you in the Sacrament of Your love, the ineffable Eucharist. I wish to receive you in the poor home that my heart offers you. In anticipation of the happiness of sacramental communion, I want to possess you in spirit. Come to me, oh my Jesus, that I may come to you. May Your love inflame my whole being, for life and death. I believe in you, I hope in you, I love you. So be it. Amen