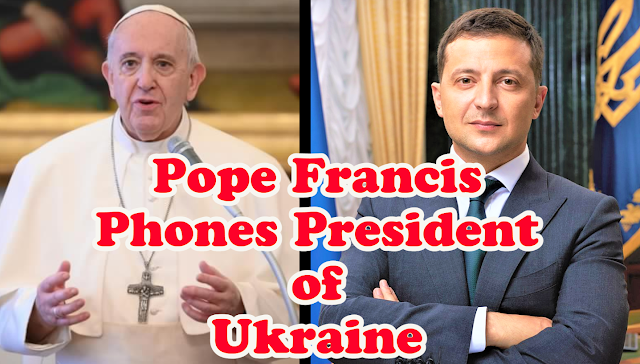 Pope Francis Phoned Ukraine President Volodymyr Zelenskyy. The Pope explained that he felt, “Deep pain for the war in Ukraine." Vatican News and the Holy See released that during the call the Ukrainian President thanked Pope Francis for his prayers for peace and said that the Ukrainian people feel his “spiritual support.” On Saturday, February 26th, 2022 the phone call to the Ukraine from the Vatican occurred. The Holy See Press Office's Director, Matteo Bruni, said the telephone call took place while the war was reaching critical points in Kyiv.

A tweet from the Ukrainian Embassy to the Holy See said Pope Francis expressed his "most profound pain for the tragic events unfolding in our country.”
President Zelenskyy, himself, Tweeted:

Thanked Pope Francis @Pontifex for praying for peace in Ukraine and a ceasefire. The Ukrainian people feel the spiritual support of His Holiness.

“I thanked Pope Francis for praying for peace in Ukraine and a ceasefire. The Ukrainian people feel the spiritual support of His Holiness”.
The Pope has used his Twitter account @Pontifex to call for peace saying: “Jesus teaches us to respond to the diabolical senseless of violence with God’s weapons: with prayer and fasting. May the Queen of peace preserve the world from the folly of war”.
On Friday, in a tweet in Ukrainian and in Russian, the Pope tweeted a quote from his encyclical Fratelli tutti:
“Every war leaves our world worse than it was before. War is a failure of politics and of humanity, a shameful capitulation, a stinging defeat before the forces of evil”.
The tweets, were accompanied by the image of the crucified Christ, and by the #PrayTogether #Ukraine hashtags.
The telephone conversation took place the day after the Pope made a 30-minute visit to the Russian embassy to the Holy See. Also on Friday, the Pope called Major Archbishop Sviatoslav Shevchuk, the head of the Ukrainian Greek Catholic Church, asking for news on the situation in Kyiv and in Ukraine and expressing his will to do everything in his power to help. The Pope also thanked the UGCC for its closeness to the people, for its choice to remain with the people, and for having opened up the basement of the Kyiv cathedral as a bomb shelter. He also assured the Major Archbishop of his prayers and offered his apostolic blessing to the suffering Ukrainian people.
Edited from Vatican News