The parish priest kidnapped on Sunday, February 6th, 2022, has been released. Fr. Joseph Danjuma Shekari, the Nigerian priest kidnapped, February 6, has regained his freedom according to a statement from the diocese of Kafanchan. Fr. Shekari was released around 10.30 pm (local time) on Monday February 7. Fr. Joseph Danjuma Shekari, parish priest of St. Monica’s Catholic Church, Ikulu Parish, in the Kauru Local Government Area of Kaduna State, in north-central Nigeria was kidnapped around 11.30 pm on Sunday February 6th by armed men who had stormed the parish house. The cook of the parish house was killed in the attack.
Rev. Fr. Joseph Danjuma Shekari, was released after only 48 hours. The gunmen stormed St. Monica’s Catholic Church, Ikulu Parish, in Kauru Local Government Area, Kaduna State. 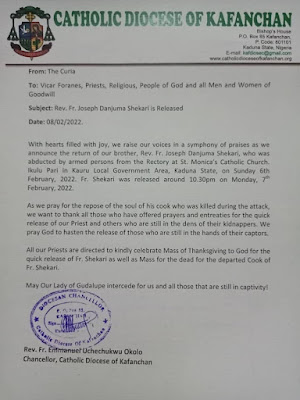 The terrorists killed a cook during the attack. Father Shekari was released on Tuesday, according to the Catholic Diocese of Kafanchan In a statement, the Chancellor of the Catholic Diocese of Kafanchan, Rev. Fr.mmanuel Uchechukwu Okolo, said the priest was released by his abductors around 10:30 p.m. on Monday. “With hearts full of joy, we raise our voices in a symphony of praises as we announce the return of our brother, Rev. Fr. Joseph Danjuma Shekari, who was abducted by armed persons on Sunday, February 6, 2022, from the Rectory at St. Monica’s Catholic Church Ikulu in Kauru Local Government Area, Kaduna State.” “On Monday, February 7, 2022, around 10.30 p.m., Fr. Shekari was released.” As we pray for the repose of his cook’s soul, who was killed in the attack, we’d like to thank everyone who has offered prayers and entreaties for his release.” “We beseech God to hasten the release of those who remain in the hands of their captors.” All of our Priests have been instructed to kindly celebrate “Mass of Thanksgiving to God for Fr. Shekari’s quick release, as well as Mass for the dead and Fr. Shekari’s departed Cook,” they said.
Source: https://www.facebook.com/113397686731953/photos/a.113457703392618/724657302272652/