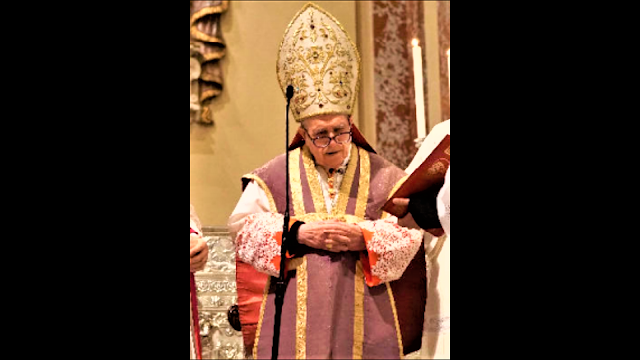 To His Excellency Rev.

In learning the news of the death of Cardinal Luigi de Magistris, illustrious son of this land, I wish to express my closeness and condolences to the family, to you, to the presbytery and to the faithful all of my closeness and condolences for the mourning that has affected the entire community ecclesial. In remembering this esteemed brother who, animated by irreproachable priestly zeal, served the Lord and the Church with great dedication, I think with gratitude of his generous commitment to the Holy See as a diligent and wise collaborator of my predecessors. I also think of his love for the ministry of reconciliation, which he has always carried out with admirable diligence, striving for the good of souls. I raise my prayer to the Lord that, through the intercession of the blessed Virgin Mary of trust, he may welcome this faithful servant to heavenly Jerusalem, and I cordially impart my blessing to all who take part in the funeral rite.

Although his vocation to the priesthood began at a young age, before entering the seminary he earned a degree in liberal arts at the University of Cagliari.

He moved to Rome to study at the Pontifical Roman Seminary and was ordained a priest on 12 April 1952. He returned to Cagliari and served in parish ministry and at the diocesan ecclesiastical tribunal.

In 1957 he returned to Rome and undertook studies in philosophy and theology at the Pontifical Lateran University.

On 1 October 1958, he entered the service of the Holy See as secretary of the Lateran Athenaeum.

From February 1959 he served in the Congregation for the Doctrine of the Faith, first as a substitute notary, and subsequently as a summist.

In February 1969 he was transferred as a minutant at the Council of Public Affairs of the Church.

On 2 May 1979 he was appointed as regent of the Apostolic Penitentiary.

On 6 March 1996 he was assigned the titular see of Nova and received Episcopal consecration on 28 April 1996.

On 22 November 2001 he was appointed as Major Pro-Penitentiary, a role he fulfilled until 7 October 2003.

Created and proclaimed Cardinal by Pope Francis in the consistory of 14 February 2015, of the Deaconry of Santissimi Nomi di Gesù e Maria in Via Lata (Most Holy Names of Jesus and Mary on Via Lata).