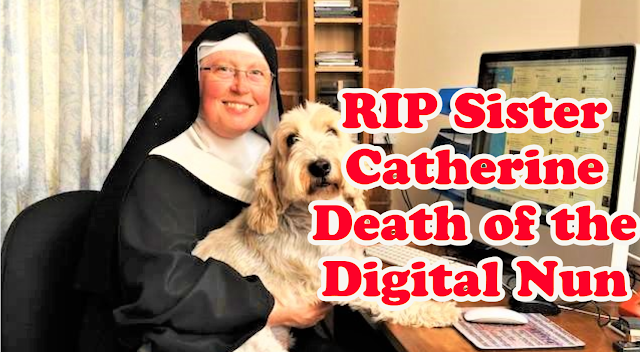 Sister Catherine Wybourne, OSB, born Driana Enid Wybourne, a Benedictine Nun has died. She was born in April 1954 and died on the 24th of February 2022. She was a British Benedictine nun and prioress (from 2004) of Howton Grove Priory, Hereford (formerly Holy Trinity Monastery, East Hendred), in England. She was also a well-known and beloved Nun with a strong internet ministry known as the Digitalnun. In 2013 she won the Blogger of the Year award from the Christian New Media and Awards Conference.

She was also on different social media and connected with thousands along with the monastery's furry friends.

Wybourne was born in Chatham and studied at Girton College, where she graduated in 1976 with an MA in History. Wybourne spent three years in banking before entering Stanbrook Abbey in 1981. She wrote on the faith and monasticism. She contributed a weekly column to The Universe, Catholic newspaper in Great Britain and Ireland. She was also called Dame Catherine Wybourne as Dame is a title of respect used for certain Benedictine nuns. Sister Wybourne died after a long battle with cancer on the 24th of February 2022, at the age of 67.
An abbot (priest) named Fr. Paul from Belmont Abbey anointed Sister Wybourne and said this after her death:
"Her peaceful death comes after a long struggle with cancer, throughout which Dame Catherine showed us all the way to accept suffering with good humour as a gift from God and to welcome death as his most precious gift. Whilst on her earthly pilgrimage, she served her Lord as a Benedictine nun, sharing her rich, deep and practical spirituality and knowledge of the Christian faith with countless people all over the world by her wise words and helpful insights both into the mystery of God and of human nature. Her monastic website and blog were of the highest quality both in technology and content."  Source: https://www.belmontabbey.org.uk/message-of-abbot-paul-friday-25th-february and
https://www.facebook.com/digitalnun