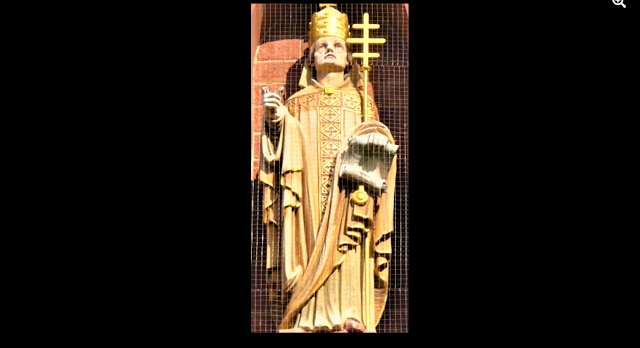 Perhaps the greatest of the great popes who occupied the chair of Peter during the eighth century, a Roman, son of Marcellus and Honesta. To his contemporaries in the West he was known as Gregory Junior or the Younger; to those in the East, who confounded him with Gregory I (author of "Dialogues") he was "Dialogus".

The year of his birth is not known, but while very young he showed a desire for the Church and was placed by the pope in the "schola cantorum". He was made a subdeacon and sacellarius (paymaster and almoner) of the Roman Church by Sergius I. Then the care of the papal library was entrusted to him, and he has the honour of being the first papal almoner or librarian known to us by name. By the time he had become a deacon, he had given such signs of character and superior intelligence that he was chosen by Pope Constantine to accompany him when he had to go to Constantinople to discuss the canons of the Quinisext Council with the truculent tyrant, Justinian II. The pope's trust was not misplaced. The deacon Gregory "by his admirable answers", solved every difficulty raised by the emperor. One of the first things which Gregory took in hand when he became pope (19 May, 715) was to put in repair the walls of Rome. Not for the last time had the Lombards, those old enemies of the Romans, attacked their city and now a new foe had shown itself. The Mediterranean was fast becoming a Saracen lake, and there was fear that the Moslems might make a descent upon the Eternal City itself. Gregory had made good progress with his work of repair, when various causes combined with a devastating flood of the Tiber to prevent him from completing it. But throughout all his pontificate, Gregory failed not to scan with anxiety the movements of the Saracens, and he is credited with having sent tokens of encouragement to the Frankish leaders who were stemming their advance in Gaul.

In the first year of his pontificate, he received a letter from John, Patriarch of Constantinople. Addressed "to the sacred head of the Church", it was really an apology for his having shown himself subservient to Philippieus Bardanes in the matter of Monothelism. Gregory also received several distinguished pilgrims during his pontificate. Among the many Anglo-Saxon pilgrims who came to Rome during his reign, the most famous were Abbot Ceolfrid and King Ina, of whom the one took to the pope the famous Codex Amiatinus, and the other founded the "Schola Anglorum". Duke Theodo I of Bavaria also came to Rome to pray, and no doubt to obtain from the pope more preachers of the Hospel for his country. Among those whom Gregory dispatched for the conversion of Bavaria was St. Corbibian, who became one of its apostles. But the great apostle of Bavaria, as of Germany generally, was St. Winfrid, or Boniface, as he was afterwards called. Anxious to preach to the heathens, he went to Rome, and God "moved the pontiff of the glorious See" to grant his wishes. He sent Boniface "to the wild nations of Germany", bidding him, by the irrefragable authority of Blessed Peter, "go forth and preach the truths of both Testaments". Gregory watched and encouraged the work of Boniface unremittingly. In 722 he consecrated him bishop and interested the famous Charles Mantel in his labours. Gregory was a great supporter of the monastic order. On the death of his mother, he converted his parental mansion into a monastery, and founded or restored many others. Among those he helped to restore was the famous Abbey of Monte Cassino. During the early portion of his pontificate, Gregory was on good terms with the Lombards. Their king drew up his laws under his influence; but their dukes, with or without the consent of their king, embroiled the peninsula by seizing portions of the possessions of the Greek empire. The Greek exarch at Ravenna was quite unable to stem the advance of the Lombards, so that Gregory appealed for help to Charles Martel and the Franks. Charles could not or would not come, but greater commotion in Italy than could have been caused by his advent was aroused by the publication there of the decrees of the Greek emperor, Leo III, known as the Isaurian or the Iconoclast (727). The Italians had been previously enraged by his attempt to levy an extraordinary tax on them. Despite the attempts of Greek officials to take his life, Gregory opposed both the emperor's illegal taxes and his unwarrantable interference in the domain of ecclesiastical authority. Now was the opportunity of the Lombards. When the exarch attempted to compel the pope to obey the imperial decrees, they became his defenders. Nearly all the Byzantine districts of Italy also turned against the emperor, and but for the pope would have elected another emperor to oppose him. When all seemed lost to the Byzantine cause in Italy, Eutychius, the last of the exarchs, contrived to wean the Lombards from the pope and to make them turn against him. The exarch was to help Liutprand, the Lombard king, to bring the almost independent Lombard Dukes of Benevento and Spoleto into complete subjection of his authority, and Liutprand was to assist him in bringing the pope to his knees. But the personal influence of Gregory over Liutprand was able to dissolve this unnatural alliance, and he repaid the exarch's treatment of him by furnishing him with troops to put down a rebellion against the imperial authority.

In connection with Gregory's struggle against the Iconoclast emperor and his Italian representatives, certain doubtful points have been hitherto passed over. For instance, it is certain that about the year 730 Ravenna fell for a brief space into the hands of the Lombards, and that by the exertions of the pope and the Venetians, it was recovered and continued to remain for a year or two longer a portion of the Byzantine empire. It is not, however, certain whether it was Gregory II or Gregory III who rendered this important service to Leo III. Probably, however, it was done by Gregory II about the year 727; though perhaps it is not quite equally probable that the two famous condemnatory letters which Gregory II is said to have sent to Leo III are genuine. If they are authentic, then it is certain not only that Ravenna was captured by the Lombards about 727, but that the independent temporal authority of the popes which in fact began with Gregory II was consciously felt by him. But when later Greek historians asserted that Gregory "separated Rome and Italy and the whole West from political and ecclesiastical subjection" to the Byzantine Empire, they are simply exaggerating his opposition to the emperor's illegal taxes, and Iconoclastic edicts. Despite all provocation, Gregory never for a moment swerved in his loyalty to the Iconoclast emperor; but, as in duty bound, he opposed his efforts to destroy an article of Catholic Faith. By his letters sent in all directions he warned the people against the teachings of the emperor, and in a council at Rome (727) proclaimed the true doctrine on the question of the worship of images. To the best of his power, also, he supported St. Germainus, the Patriarch of Constantinople, in the resistance he was making to the "gospel of Leo", and threatened to depose Anastasius, who had replaced the saint in the See of Constantinople, if he did not renounce his heresy. Gregory recognized both the Patriarch of Forum Julii (Cividale) and the Patriarch of Grado as joint heirs of the original metropolitan See of Aquileia, and for a time caused these rival prelates to live in peace.

Gregory died in February, and was buried in St. Peter's (11 Feb., 731). He is honoured as a saint in the Roman and other martyrologies.