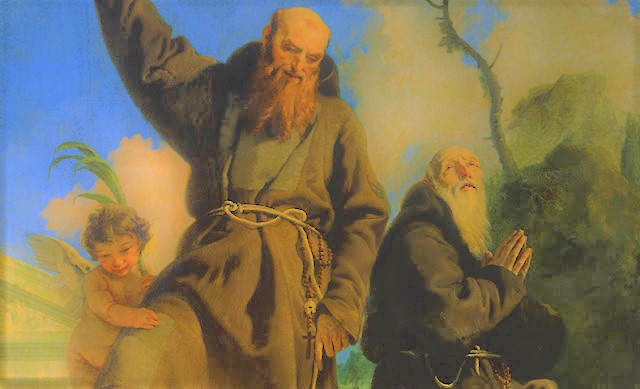 Born:
8 January 1556 at Leonissa, Umbria, Italy
Died:
Saturday 4 February 1612 at Umbria, Italy
Canonized:
29 June 1746 by Pope Benedict XIV
CAPUCHIN, PRIEST
In the world named Eufranio Desiderio; born in 1556 at Leonessa in Umbria; died 4 February, 1612. From his infancy he showed a remarkably religious bent of mind; he used to erect little altars and spend much time in prayer before them, and often he would gather his companions and induce them to pray with him. Whilst yet a boy he used to take the discipline on Fridays in company with the confraternity of St. Saviour.
He was educated by his uncle, who had planned a suitable marriage for him, but in his sixteenth year he fell sick of a fever, and on his recovery, without consulting his relative, he joined the Capuchin reform of the Franciscan Order. He made his novitiate in the convent of the Carcerelle near Assisi. As a religious he was remarkable for his great abstinence. "Brother Ass", he would say to his body, "there is no need to feed thee as a noble horse would be fed: thou must be content to be a poor ass." In 1599, the year before his Jubilee year, he fasted the whole year by way of preparation for gaining the indulgence. In 1587 he was sent by the Superior General of his order to Constantinople to minister to the Christians held captive there. Arrived there he and his companions lodged in a derelict house of Benedictine monks. The poverty in which the friars lived attracted the attention of the Turks, who went in numbers to see the new missionaries. He was very solicitous in ministering to the captive Christians in the galleys. Every day he went into the city to preach, and he was at length thrown into prison and only released at the intervention of the Venetian agent. Urged on by zeal he at last sought to enter the palace to preach before the Sultan, but he was seized and condemned to death. For three days he hung on the gallows, held up by two hooks driven through his right hand and foot; then he was miraculously released by an angel. Returning to Italy, he took with him a Greek archbishop who had apostatized, and who was reconciled to the Church on their arrival in Rome. Joseph now took up the work of home missions in his native province, sometimes preaching six or seven times a day. In the Jubilee year of 1600 he preached the Lent at Otricoli, a town through which crowds of pilgrims passed on their way to Rome. Many of them being very poor, Joseph supplied them with food; he also washed their clothes and cut their hair. At Todi he cultivated with his own hands a garden, the produce of which was for the poor. His feast is kept on 4 February throughout the Franciscan Order. He was canonized by Benedict XIV. Text Catholic Encyclopedia