Saint February 5 : Blessed Elizabeth Canori a Wife of an Unfaithful Husband and Mother who Belonged to the 3rd Order of Trinitarians 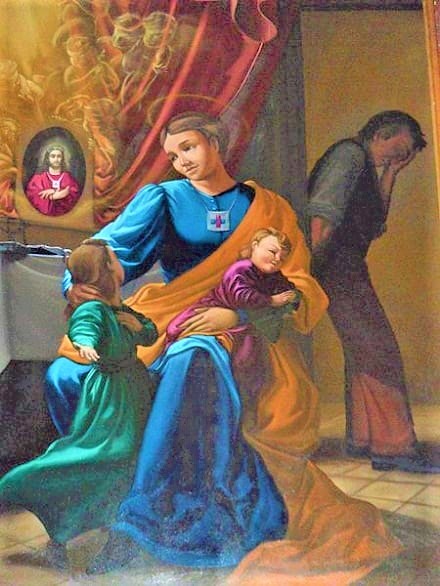 Elisabetta Canori Mora was born in Rome on November 21, 1774 to Tommaso and Teresa Primoli.
Her is a wealthy family, deeply Christian and attentive to the education of their children. Her father was an important landowner and managed many agricultural estates, an old-fashioned gentleman, he administered without greed disdaining abuse and oppression.
The Canori couple have twelve children, six of whom die in the first years of life. When she is born she Elisabetta she finds five male brothers and a sister, Maria; after two years another sister arrives, Benedetta.
Within a few years, the bad harvests, the death of the cattle and the insolvency of the creditors, the economic situation changes and Tommaso Canori is forced to resort to the help of a brother who lives in Spoleto who takes care of his nieces Elisabetta and Benedetta. The uncle decides to entrust the nieces to the Augustinian Sisters of the monastery of S. Rita da Cascia, here Elisabetta stands out for her intelligence, profound interior life and spirit of penance. She returned to Rome, for some years she led a brilliant and worldly life, making herself known for the refinement of her features and the beauty of her. Elizabeth will judge this period of her life as a "betrayal", even if her moral consistency does not fail her and her religious sensitivity is somehow safeguarded.
A high prelate who knows the economic problems and the spiritual qualities of the Canori family well, proposes to let Elizabeth and Benedetta enter the monastery of the Oblates of St. Philip, taking on all the expenses. Benedetta accepts and becomes a nun in 1795, Elisabeth no, she doesn't feel like leaving the family in difficulty.
On 10 January 1796 in the church of Santa Maria in Campo Corleo, she married.
At the age of 22, she marries a young lawyer, Cristopher Mora, who succumbs to the flattery of a woman of low status and reduces the family to poverty, while not abandoning the marital roof. Elizabeth then decides to live in total fidelity to her husband and to her two daughters whom she painstakingly maintains with her job. Her strength comes from intense prayer, from her faithful belonging to the Trinitarian Third Order and from the persuasion that her sacrament of Matrimony truly linked her to Christopher in a precious and indissoluble way. She gives herself for the conversion of her husband, for the Pope, the Church and her city of Rome, where she died on February 5, 1825. Cristopher Mora later became a priest and a conventual Franciscan. Elisabetta Canori Mora was beatified on April 24, 1994 in Rome by Saint John Paul II. Her mortal remains of her are venerated in the church of San Carlo alle Quattro Fontane (San Carlino) in Rome.
Roman Martyrology: In Rome, Blessed Elisabetta Canori Mora, mother of a family, who, after having suffered for a long time due to her husband's infidelity, economic hardship and cruel harassment by relatives, endured everything with unsurpassed charity and patience and he offered his life to the Lord for the conversion, salvation, peace and sanctification of sinners by joining the Third Order of the Most Holy Trinity.

"I detached myself from vanities, I overcome many obstacles that prevented me from going to God ...".
"I propose not to desire anything that is of my own profit, but to fulfill God's holy will in every instant of my life".
"My beloved daughter, offer yourself to my heavenly Father for the benefit of the Church: I promise you my help ...".
(from the autobiography)
"Such a mother is not found in the world, and I am unworthy to be her consort."
(her husband Cristoforo to her daughters).
Source: https://santiebeati-it.translate.goog/Detailed/90597.html?_x_tr_sch=http&_x_tr_sl=auto&_x_tr_tl=it&_x_tr_hl=it