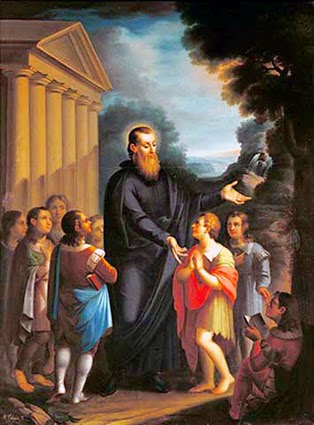 FOUNDER OF THE ORDER OF SOMASCHA
Feast Day:
February 8
1481, Venice Died:
8 February 1537, Somasca
Canonized:
1767 by Pope Clement XIII
Patron of:
orphans
PRAYER: God of mercy, You chose Jerome Emiliani to be a father and friend of orphans. May his prayers keep us faithful to the Spirit we have received, who makes us Your children. Through our Lord Jesus Christ, Your Son, who lives and reigns with You in the unity of the Holy Spirit, one God, for ever and ever. Amen.
Founder of the Order of Somascha; b. at Venice, 1481; d. at Somascha, 8 Feb., 1537; feast, 20 July; son of Angelo Emiliani (popularly called Miani) and of Eleonore Mauroceni, joined the army, and in 1508 defended Castelnuovo against the League of Cambray. Taken prisoner and miraculously liberated, he made a pilgrimage to the shrine of Our Lady of Treviso, in fulfillment of a vow. He was then appointed podestà of Castelnuovo, but after a short time returned to Venice to supervise the education of his nephews. All his spare time was devoted to the study of theology and to works of charity. After his ordination to the priesthood in 1518, the hospitals and the hovels of the poor were his favourite resorts. In the year of plague and famine (1528), he seemed to be everywhere, and showed his zeal especially for the orphans, whose number had so greatly increased. He rented a house for them near the church of St. Rose and, with the assistance of some pious laymen, ministered to their wants. To his charge was also committed the hospital for incurables, founded by St. Cajetan. In 1531 he went to Verona and induced the citizens to build a hospital; at Brescia he erected an orphanage, at Bergamo one for boys and another for girls. Here also he founded the first home for fallen women who wished to do penance. Two priests, Alessandro Besuzio and Agostino Bariso, now joined him in his labours of charity, and in 1532 Jerome founded a religious society, placing the motherhouse at Somascha, a secluded hamlet between Milan and Bergamo. In the rule, Jerome puts down as the principal work of the community the care of orphans, poor, and sick, and demands that dwellings, food and clothing shall bear the mark of religious poverty. Jerome fell a martyr to his zeal; contracting a disease at Bergamo, he died at Somascha. He was beatified by Benedict XIV in 1747, and canonized by Clement XIII in 1767. The Office and Mass in his honour were approved eight years later. His biography was first written by Scipio Albani (1600); another by Andreas Stella (1605). The best was written by Aug. Tortora (Milan, 1620; in "Acta SS.", Feb., II, 217 sq.).
After the death of Jerome his community was about to disband, but was kept together by Gambarana, who had been chosen superior. He obtained the approval (1540) of Paul III. In 1547 the members vainly sought affiliation with the Society of Jesus; then in 1547-1555 they were united with the Theatines. Pius IV (1563) approved the institution, and St. Pius V raised it to the dignity of a religious order, according to the Rule of St. Augustine, with solemn vows, the privileges of the mendicants, and exemption. In 1569 the first six members made their profession, and Gambarana was made first superior general. Great favour was shown to the order by St. Charles Borromeo, and he gave it the church of St. Mayeul at Pavia, from which church the order takes its official name "Clerici regulares S. Majoli Papiae congregationis Somaschae". Later the education of youth was put into the programme of the order, and the colleges at Rome and Pavia became renowned. It spread into Austria and Switzerland, and before the great Revolution it had 119 houses in the four provinces of Rome, Lombardy, Venice, and France. At present the order has ten houses in Italy two of which are in Rome. The general resides in Rome at S. Girolamo della Carita.
(Taken frrom Catholic Encyclopedia)