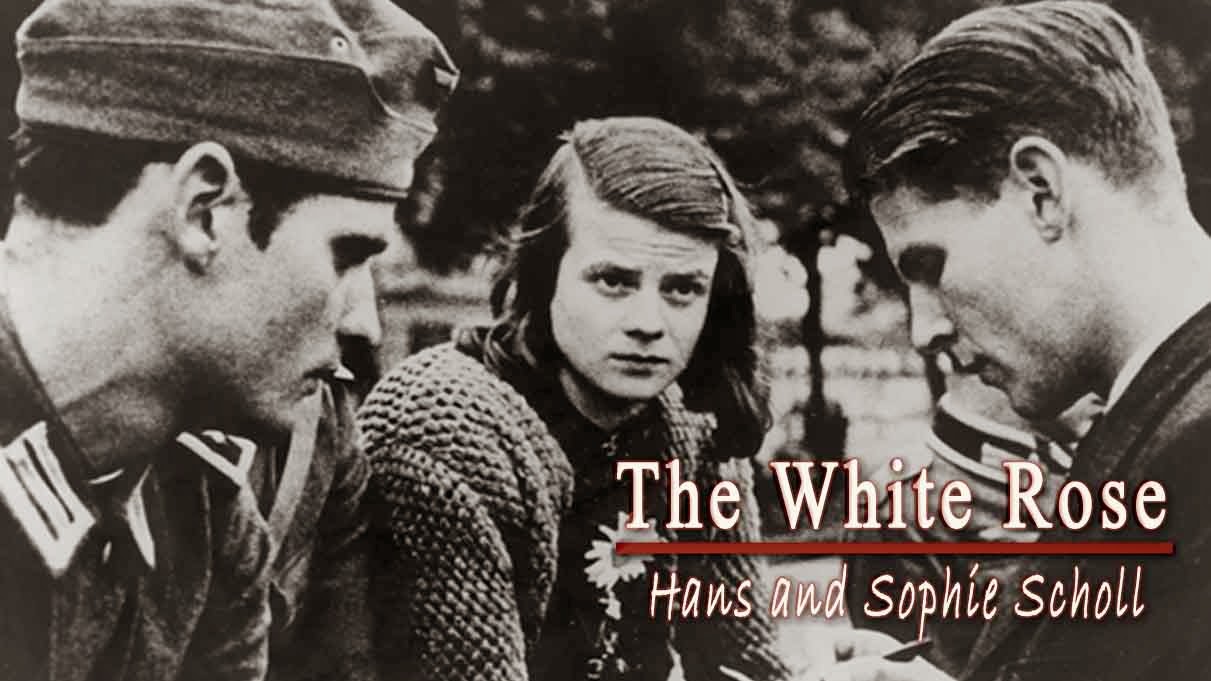 On February 22nd we remember the heroic deaths of 3 young souls who courageously spoke against the Nazi regime. Hans and Sophie Scholl and Christof Probst were executed on February 22, 1943 by guillotine in Stadelheim Prison, Munich.Sophia Magdalena Scholl was born on 9 May 1921 she was a German student and active in the White Rose, a non-violent resistance group in Nazi Germany. She was convicted of high treason after distributing anti-war leaflets at the University of Munich with her brother Hans. They were then both executed by guillotine. The Scholls were brought up as Lutherans.  Sophie and Hans both asked to be received into the Catholic Church an hour before they were executed
but were dissuaded by their pastor who argued that such a decision would upset their mother, a Lutheran lay preacher. Sophie and her brother were influenced by the works of John Henry Newman, she gave her boyfriend, Fritz Hartnagel two volumes of Cardinal John Henry Newman's sermons.
The White Rose was founded after Scholl and others read a anti-Nazi sermon by Clemens August Graf von Galen, the Roman Catholic Bishop of Münster. The members initially included Hans Scholl (Sophie's brother), Willi Graf, and Christoph Probst. In early summer 1942, this group of produced six anti-Nazi political resistance leaflets.  Sophie Scholl last words were: "How can we expect righteousness to prevail when there is hardly anyone willing to give himself up individually to a righteous cause. Such a fine, sunny day, and I have to go, but what does my death matter, if through us, thousands of people are awakened and stirred to action?"  Fritz Hartnagel later married Sophie's sister Elisabeth. In mid-1943, Allied forces dropped over Germany millions of copies of the tract from White Rose, now retitled The Manifesto of the Students of Munich.  The Geschwister-Scholl-Institut ("Scholl Siblings Institute") for Political Science at the Ludwig Maximilian University of Munich (LMU) is named in honour of Sophie Scholl and her brother Hans.  Over 190 local schools as well as countless streets and squares in Germany have been named after Scholl and her brother. In February 2005, a movie about Scholl's last days, Sophie Scholl – Die letzten Tage (Sophie Scholl: The Final Days), with actress Julia Jentsch was made and won an Oscar. It draws on interviews with survivors and transcripts hidden in East German archives until 1990. (from various sources - http://whiteroseproject.seh.ox.ac.uk/index.php/the-white-rose/ and Wikipedia)