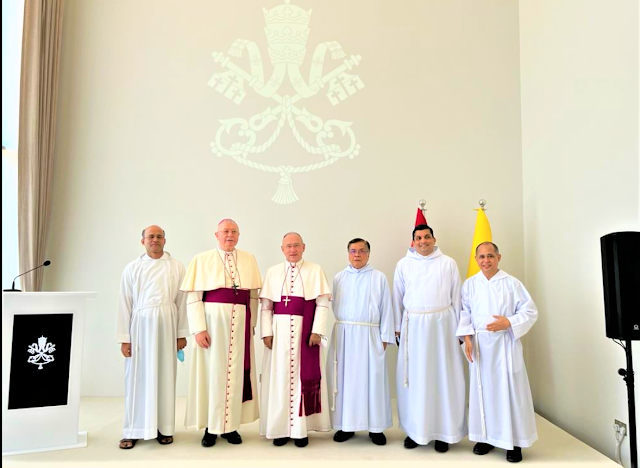 UAE Vicariate Release: The Substitute of the Vatican's Secretariat of State, His Grace Archbishop Edgar Peña Parra officially opened the new Apostolic Nunciature to the UAE today at Abu Dhabi in the presence of Her Excellency Noura bint Mohammed Al Kaabi, the Minister of Culture and Youth for the United Arab Emirates, Omar Ghobash, Assistant Minister for Culture and Public Diplomacy, His Excellency Bishop Paul Hinder, Apostolic Vicar of Southern Arabia and other ambassadors and officials of the UAE government.

Below is the full text of the speech delivered by the archbishop during the inaugural ceremony.

Your Highness
Your Excellencies,
Distinguished Members of the Diplomatic Corps,
Ladies and Gentlemen,

I would like to begin by conveying the cordial greetings and  spiritual closeness of His Holiness Pope Francis to all present, together  with his best wishes for the recent celebration of the fiftieth anniversary  of the country's founding. The presence of this new Apostolic  Nunciature is a further sign of the Holy Father’s solicitude and concern  for all the people in this land.
As I had occasion to remark in similar  circumstances, it is for this reason that Apostolic Nunciatures are often  affectionately referred to as the Pope's House. The same is certainly  true for this place, as it is Pope Francis' sincere desire that this edifice  will assist the Papal Representative in carrying out his mission to the  United Arab Emirates and to the local Catholic community.

The inauguration of this Diplomatic Representation of the Holy See demonstrates the good bilateral relations that ready exist between the United Arab Emirates and the Holy See. In this regard, I would also highlight that this year marks the fifteenth anniversary of diplomatic relations. I am convinced that the relationship formed over this period is based on a mutual understanding of the importance of faith and the positive role that religion should play in society. This was affirmed three years ago today during Pope Francis' 2019 Apostolic Journey to this country when he and the Grand Imam of Al-Azhar, Ahmad Al-Tayyeb, signed the landmark document on Human Fraternity: For World Peace and Living Together.

The document speaks eloquently of the elements that unite  Muslims and Christian, based on a shared belief in God the Creator  of all things. From this stems the call for believers to live in fraternity  with all people regardless of race, religion or creed and to safeguard  Creation, our common home. Contrary to any distortion or manipulation of religion, the response to this call can be nothing other than choosing the path of dialogue, which leads to better mutual  understanding and cooperation.

In signing the document, the Grand Imam and the Pope expressed their desire that "it may serve as a guide for future generations to advance a culture of mutual respect in the awareness of the great divine grace that makes all human beings brothers and sisters” (Introduction). It is my hope that it will also serve as a framework for deepening our diplomatic relations. In moving forward, therefore, let us intensify our efforts to promote the contents of the document in order to help build a more just and peaceful world. These efforts are truly needed today as we continue to see the negative consequences of replacing transcendent truths about the human person and creation with purely superficial and materialistic values. May this new Embassy of the Holy See serve as a place of encounter and dialogue for our bilateral cooperation for many years to come!

On this joyous occasion, my thoughts naturally turn to the  Catholic community in the country. As the House of the Pope in the  United Arab Emirates, the Apostolic Nunciature also manifests the Holy  Father's pastoral care for them. May this place be a source of  encouragement to them as they strive to live their faith and be examples  of human fraternity to all their brothers and sisters in this land.

In conclusion, I would like to thank His Highness Sheikh Mohamed bin Zayed Al Nahyan, the Crown Prince of Abu Dhabi and Deputy Supreme Commander of the United Arab Emirates Armed Forces,  His Highness Sheikh Abdullah  bin Zayed Al Nahyan, Minister of Foreign Affairs and International  Cooperation, His Excellency Bishop Paul Hinder, Apostolic Vicar for  Southern Arabia, and all of our distinguished guests for your presence  on this special occasion. I also offer sincere gratitude to the Civil  Authorities for their efforts in helping the Holy See obtain this beautiful  edifice. Finally, I am particularly grateful to Monsignor Kryspin Dubiel,  Chargé d 'Affaires, and to all those from the local Catholic community  who helped make this desire of the Holy Father a reality. Please know  once again of the Holy Father's closeness as we open the Apostolic  Nunciature in the United Arab Emirates. Thank you!