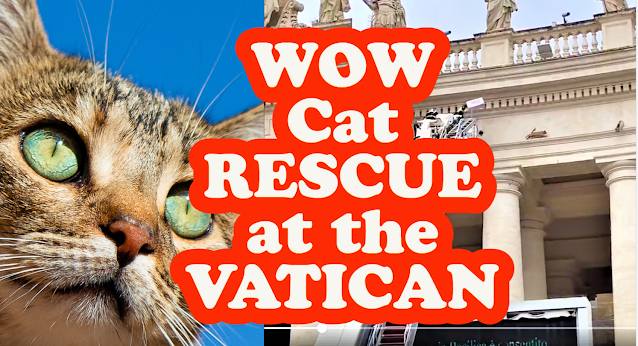 On February 15, 2022 a dramatic rescue of a cat stuck on the colonnade of St. Peter’s Square at the Vatican caused a great spectacle. For more than two hours in the morning, a cat was stuck in Bernini’s colonnade. Firefighters of the Vatican came with two trucks that had ladders attached. The cat tried to escape the firefighters by jumping over them. The tried to jump off the colonnade but fell 16 meters amid cries from the crowd below (see 2nd video below). Firefighters came to its aid on the ground and a veterinarian, came to help.

The cat escaped the firefighter’s twice and ran along the colonnade’s edge pic.twitter.com/bakDUDlmPR

The cat tried to jump to freedom but fell several meters down to the pavement below. The firefighters were quick to surround him though and a vet in the crowd also came to help pic.twitter.com/a6prWjeyZh