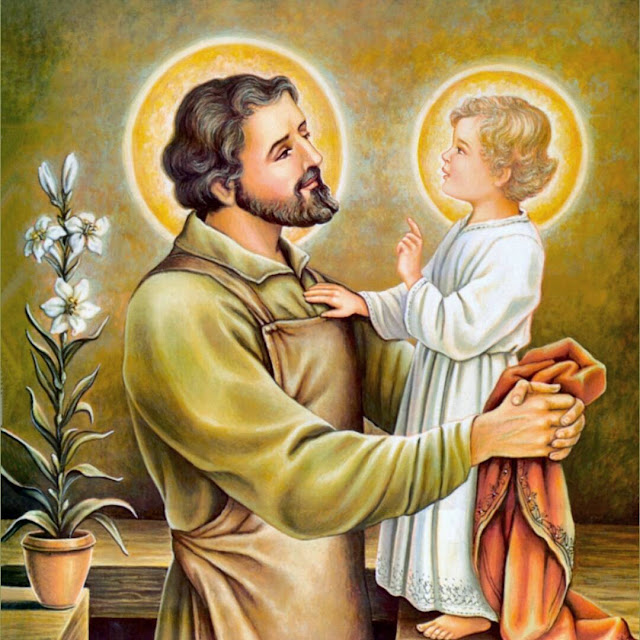 1. March 19 is known as St. Joseph Day, or the Solemnity of St. Joseph (if celebrated in Lent you can break the Fast) 2.  In Europe the people dedicate an altar to him, also known as “St. Joseph’s Table” or “la tavola di San Giuseppe.” People decorate it with flowers, candles, wine and “lucky” foods.3. According to the Catholic Encyclopedia, the Apocryphal Date for Joseph's birth is 90 BC in Bethlehem and the Apocryphal Date of his death is July 20, AD 18 in Nazareth.
4. The Church celebrates two feast days uniquely for Saint Joseph: March 19 for Joseph the Husband of Mary and May 1 for Joseph the Worker. In 1955 Pope Pius XII established the Feast of "St. Joseph the Worker" . This is also May Day (International Workers' Day) since he is the patron of workers.5. Joseph has no recorded words in Scripture6. Veneration of St. Joseph goes back at least to the 9th century An early title used to honor him was nutritor Domini, meaning “guardian of the Lord.” 7.  He is the patron of the Universal Church, a happy death, families, unborn, fathers, expectant mothers, travelers, immigrants, craftsmen, engineers, and workers. He’s also the patron of the Sicily, Americas, Canada, China, Croatia, Mexico, Korea, Austria, Belgium, Peru, the Philippines and Vietnam. 8. Josephology sub-disciplines of theology, in the 20th century did some people start to gather the Church’s insights about him. In the 1950s, three centers dedicated to the study of St. Joseph.9. It’s tradition to wear red on St. Joseph’s Day.10. He is mentioned in the Canon of the Mass.
“St. Joseph was chosen among all men, to be the protector and guardian of the Virgin Mother of God; the defender and foster-father of the Infant-God, and the only co-operator upon earth, the one confidant of the secret of God in the work of the redemption of mankind.” -- St. Bernard of Clairvaux