ACN Reports 380 Civilians Killed in Ukraine - Bishop of Kharkiv in Bunker and Nun says "Thanks to the help of the world, Ukraine resists, and we believe it will survive." 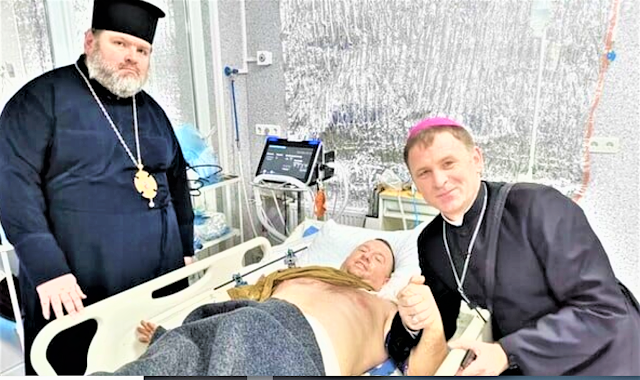 Bishop of Kharkiv, Ukraine: ‘My message is short because we are under constant bombardment’ (Image Screenshot ACN - Bishop Honcharuk (r) and Bishop Mytrofan of the Ukrainian Orthodox Church visit a wounded man.)
Heartbreaking News from Ukraine - ACN - Official government figures point to thousands of deaths, among them 380 civilians. More than 380,000 people have sought refuge in neighboring countries. Fighting has been most intense in the Kiev and in Kharkiv, Ukraine’s second most populous city.
Saturday morning the seminarians of Vorzel, on the outskirts of Kiev, were evacuated and moved to another diocese. “There has been fighting in that part of Kiev, we have been sent images that show damage to the walls of the seminary, caused by artillery and missiles,” reported Kaczmarek. “The religious communities had to take measures to protect themselves, they have been spending the nights in basements and blacking out their windows so as not to show any signs of activity.”
According to Kaczmarek, the situation in Kharkiv is critical, with streets deserted and people hiding in basements and bunkers. The Latin-rite bishop of Kharkiv-Zaporiyia has spent the past days in a bunker with several families, as well as with his Orthodox counterpart. Amid the incessant bombings, bishop Pavlo Honcharuk sent a message to Aid to the Church in Need, saying “we are really surprised and very grateful for the mobilization of so many people, not only all over Ukraine, but also abroad. I would like to especially thank the donors who, through ACN, fulfil their calling to show mercy and love. I sincerely thank you all, the whole of the ACN team, all employees, volunteers and donors.
Bishop Honcharuk doesn’t let the terrible situation get him down.
“I wish for this war to end as quickly as possible. But while evil has shown itself to be so strong, this has also exposed a lot of good. In a way, the evil we are experiencing also squeezes the good juice from the grape, and that good juice is our compassion, mutual support, and love. It shows our true faces. My message is short because we are under constant bombardment, and I am a little nervous, but we try to act normally. God bless you!”
To DONATE to ACN for Ukraine Click LINK
Elsewhere, the situation is getting worse by the hour, such as in Odessa, the country’s most important commercial port, strategically located on the Black Sea. Bombardments from the air and from the sea have continued and there is fear that fighting could worsen. During the first two days of the conflict there were long queues all over the city, and a terrible lack of basic goods such as bread and fuel. Latin-rite Bishop Stanislav Shyrokoradiuk of Odessa, confirmed that aid from neighboring countries has begun arriving, “but we are living in the here and now, and the situation is critical. We will remain here, and we ask for your prayers!”
In other parts of the country, such as in Lviv, on the border with Poland, which is so far free of fighting, the local Church continues to work to support and help the population, which has swelled with the arrival of thousands of refugees. “Finally, after some very difficult days, I have found time to write a few words. Thanks to the help of the world, Ukraine resists, and we believe it will survive. Here we have been helping the displaced, supplying air-raid bunkers, and welcoming people, especially women and children. Most then head abroad, but here they can rest with us. And we pray together. Thank you for everything,” said Sister Natalia, a nun with the Greek Catholic order of the Sacred Family in Lviv.
Speaking to ACN, Father Justyn, a Pauline Priest who had to escape to the city of Kamianets-Podilskyi, in western Ukraine, described the following situation. “It took me eight hours to travel 100 miles. The roads were full of people fleeing west. Traffic jams, lines to get into shops, chemists and gas stations along the way. People are scared because they do not know what is going to happen. Many friends have called me and ask why Ukraine must put up with such evil. Some want to make their confessions, but I can’t do that over the phone. All I can say is ‘reconcile with God, repent, sincerely ask for forgiveness and He will hear you.’ We need to pray.”
One of the most impressive testimonies ACN has received was a photograph of a baptism in the Kharkiv cathedral. The image shows a young man who had been preparing for some time and asked to be received and make his First Communion after being drafted to fight in the war.
Edited from Aid to the Church in Need - https://www.churchinneed.org/

Francy O’Donohue said…
It is terrible that the olligarchs of Russia are causing so much grief to Ukrainians with lies and propaganda in their attempt to subjugate the country, Using missiles, carpet bombing, AirPower to obliterate the country and resistance it is regrettable that NATO can not actively help them out and this may lead to Russia’s further expansion if they feel it can be achieved without outside support. Despite the courageous and brave defense of the Ukrainians the Russians have four times their population and what appears to an endless supply of weaponry that will be very difficult for Ukraine to contain on their own. With the the threat of nuclear weaponry from Russia against NATO, America, Europe and UK if they actually intervene they should not allow these Russian war mongers to get away with it. Russia will undoubtedly attempt to spread their errors throughout the world if they can take advantage with any vulnerable independent country close to them resisting their ideology that have not the support of a country as powerful as theirselves..,
March 1, 2022 at 4:21 PM