#BreakingNews Head of the Catholic Church in Ukraine says "Today we call on the whole world: stop the mass murder!" 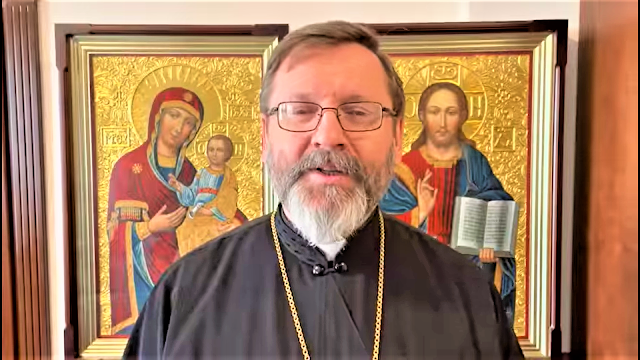 The head of the UGCC on the fifteenth day of the war: "Today we call on the whole world: stop the mass murder!"
Thursday, March 10, 2022,
On behalf of the city of Mariupol, we appeal to the whole world: close the Ukrainian skies to Russian weapons, to Russian aircraft dropping bombs on civilians. His Beatitude Sviatoslav, Father and Head of the Ukrainian Greek Catholic Church, called for this in a daily military address on the 15th day of the war.

The Ivano-Frankivsk Archdiocese has already sheltered almost 1,200 IDPs
"Today, my conscience, the conscience of every Christian, forces us to take a voice to say a sharp word 'no' to the whole world, to protest against the mass murder of people in Ukraine." In particular, in the last minutes we saw mass killings in the besieged city of Mariupol, "the head of the Church said.
He recalled that the city of Mariupol, which was founded by the Greek community as the city of Maria, today has become a cemetery for tens, thousands of people. "Yesterday we saw," said His Beatitude Sviatoslav, "horrific footage of the bombings of the maternity hospital, as well as mass graves, mass graves, in which there are hundreds of lifeless bodies. And today we must tell the whole world "no" to the massacres in Ukraine. "
According to the bishop, since the time of Nazism, since the time of Stalin's repressions, Ukraine has never seen such mass burials and mass graves of people without respect, without Christian prayer. "We are telling the whole world today: stop the mass killings!" He called.
The city of Mariupol has about four hundred thousand inhabitants and has been completely surrounded for almost two weeks now. "People are dying of hunger, people are dying of cold. Rockets fall on their heads, hail falls, bombs fall. And we must remember them today and speak to the world on their behalf. We ask: open humanitarian corridors, give women and the elderly the opportunity to leave this cold, surrounded city. Give us the opportunity to deliver food and medicine there, give us the opportunity to save people, "the Head of the Church said.


His Beatitude Sviatoslav calls to raise his voice in defense of those who die every day before the eyes of the whole world. Today, millions of people are leaving their homes in the south, east, north of Ukraine and moving to safer places.
The bishop appealed to all residents of Ukraine whose homes are visited by IDPs, regardless of what language they speak, which Church they attend, what customs they have, and open their hearts and homes to them, embrace them in the name of God.
"Today we are witnessing a terrible humanitarian catastrophe. But together we can stop it. We can stop this war, "he said.
The Primate addressed the world Ukrainian community, all our bishops and priests: "Bring the truth about the genocide of the Ukrainian people to the world community!". In all churches, he called for funeral services for those buried in mass graves without Christian prayer and burial.
Source : http://news.ugcc.ua/video/glava_ugkts_v_pyatnadtsyatiy_den_v%D1%96yni_mi_sogodn%D1%96_zaklikaiemo_ves_sv%D1%96t_zupin%D1%96t_masov%D1%96_vbivstva_lyudey_95981.html