#BreakingNews Priest Killed in Ukraine while Trying to Save Others - RIP Fr. Rostyslav Dudarenko 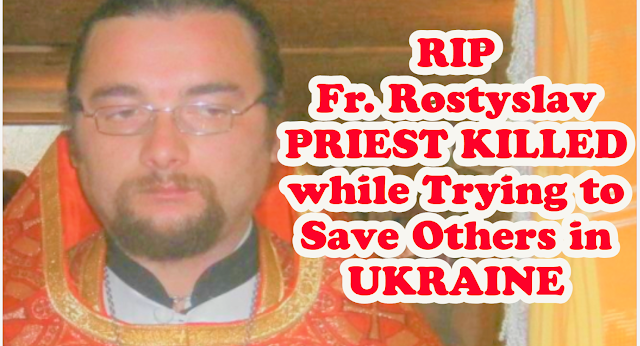 A Ukrainian Orthodox Priest, named Fr. Rostyslav Dudarenko, was killed while trying to save others. He was one of the thousands of Ukrainian civilians who volunteered during Russia’s invasion, and he was tasked with inspecting vehicles approaching the checkpoint.

Fr. Dudarenko, 45, was wearing civilian clothes at the time, but his presence also allowed him to provide spiritual assistance.

According to one survivor of the attack, who went by the alias Yukhym, he and Fr. Dudarenko were at the checkpoint with around when they learned three Russian tanks had driven through the area.

According to Yukhym, the group hid in the woods and prepared to fight the invaders if necessary.

However, when the tanks reached the checkpoint, Russian troops began ‘shooting in all directions.’

“When they realised we were hiding in the grass, they went off road to run us over with tanks,” he said.

According to the survivor, the tanks had returned to the road when Fr. Dudarenko decided to break cover in order to draw the attention of the Russian troops.

He recounted seeing the priest “raise the cross above his head, rise up from his hideout, screaming something, and walk towards them.”

“Perhaps he wanted to stop them,” Yukhym said. “I tried to call him.”

Russians are said to have fired shots in the direction of the priest after he emerged from the woods, and from Yukhym’s viewpoint it seemed all of the shots were aimed directly at Dudarenko.

“And that was it. He made just a couple of steps and fell,” Yukhym recalled.

Dudarenko’s mother Nadiia told the BBC her son ‘wanted to be able to protect everyone’, adding: “I tried to talk him out of it but I couldn’t argue with him.”

Yukhym was shot and injured in the attack, but Ukraine’s military forces arrived on the site at the same time and began pushing the Russians back. Yukhym believes the entire group would have been killed if the Ukraine forces hadn’t arrived.

The group with Fr. Dudarenko was armed with hunting rifles, a small number of Russian army Kalashnikovs, and three bulletproof vests, but Fr. Dudarenko refused to bear armaments because he was a priest.

Yukhym described him as a “kind and positive person,” which could explain why he went to halt the opposing forces.