Catholic Archbishop Sviatoslav of Ukraine says "if the conscience of the whole world stands with us...then we will not just watch heartlessly how Ukrainian children are killed." 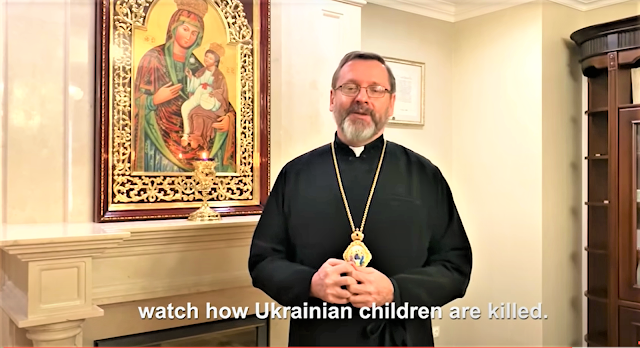 Dear brothers and sisters in Christ! Today is March 28, 2022, and Ukraine is experiencing the 33rd day of this terrible, bloody war.

Today, as we walk our Lenten path to the Passover, we look especially at the cross of our Savior. Somewhere we feel that His suffering, His death and also the Resurrection reveal the meaning of our suffering, the suffering of Ukraine, the path of the Easter procession in which the Ukrainian people are moving today.

We can say that this war brings terrible sacrifices every day. Every day a hail of new bombs and Russian missiles pours down on Ukraine. People are being killed every day on Ukrainian soil. But looking at the Cross of the Lord, we know that for some it was a way to heaven, a signpost to the Resurrection, and for others it became a stumbling block, a rock of fall. We see those two thieves who were crucified with Christ. One slandered Him and mocked Him, and the other repented and received the way, the entrance to Paradise and Heaven.

Today, I want to renew my appeal to all those who hear me, to the heads of state in whose hands the fate of modern humanity lies today, to politicians, parliamentarians, religious figures, leaders of public opinion and all people of good will: Make your choice . Take the side of the innocent victim, the unjust aggression of someone who planned to dictate his new rules not only for Ukraine but also for the whole world and is threatened by the Third World War.

Together we can stop the war, but standing before the cross of the Lord, each of us must make his choice. Let's make our choice in favor of life, in favor of God's blessing, in favor of a person who can and wants to live, live in dignity and truth!

Today, I would like to thank all those who have already made their choice and stand with Ukraine, who support our people as they can, each in his own place, each in accordance with the dictates of his own conscience.

If Ukraine is not alone in that struggle, if the conscience of the whole world stands with us, I think that then we will not just watch heartlessly how Ukrainian children are killed.