Head of Catholic Church in Ukraine says "In Ukraine we truly see mountains of corpses, rivers of blood, and seas of tears" as Death Toll Reaches Over 1,500 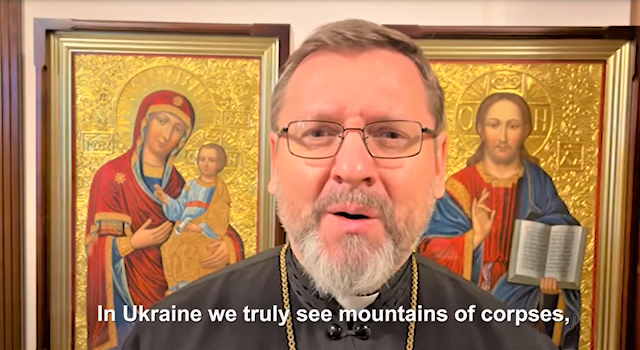 In his latest video, the Head of Catholic Church in Ukraine,  Major Archbishop Sviatoslav says, "In Ukraine we truly see mountains of corpses, rivers of blood, and seas of tears." This is as Death Toll Reaches Over 1,500 in the Ukraine-Russian war.
"Ukraine is at war for human dignity," said the Head of the UGCC on the seventeenth day of the war
Saturday, March 12, 2022, 12:16 p.m.
Let us pray today for those who did not hear the church bells, which were unburied and laid in mass graves. Let us pray for those over whom Christian funeral prayer has not been said. Let us show our mercy to the bodies of the dead and thus preserve the person, human dignity in Ukraine! His Beatitude Sviatoslav, the Father and Head of the UGCC, called for this in his daily military address on the 17th day of the war.

"The wave of solidarity that spontaneously arose throughout Germany touches our hearts and strengthens our hopes," Bishop Bohdan Djurach told German bishops.
"War is always the defeat of humanity. War is always a misfortune in which human dignity is degraded. When we fight for peace, we can win everything. When the war begins, we can lose everything, "the Primate stressed.
He noted that today in Ukraine we are witnessing a great contempt for human dignity.
“What can we, as Christians, oppose such human contempt during the war in Ukraine? - the Head of the Church asks and answers: - First of all, we must do deeds of charity and do everything to show respect for human dignity.
"Today we pray for our Ukrainian army, which protects and affirms this dignity. We pray for the civilian population of Ukraine, for our refugees, for those who remained in cold, surrounded towns and villages without water, without food, without heat. We remember them and want to help them, "said the Father and Head of the UGCC.
He added that today Ukraine is fighting for humanitarian corridors, for the salvation of man, respecting his dignity, regardless of who speaks what language, what nation he belongs to or what church he belongs to.

His Beatitude Sviatoslav drew attention to the fact that today Ukraine faces a great challenge - the inability to bury the dead, which is one of the forms of contempt for human dignity.
The Russian aggressor, who invaded Ukrainian soil, said the Primate, does not respect the bodies of his own victims and does not consider it necessary to pay tribute to those who died in Ukraine. Although our volunteers, our good people, want to give away the bodies of Russian victims, no one wants to accept them to bury them with dignity.
"We know that burying the dead is a form of charity for one's neighbor's body. With a heartache we watch how thousands of people are buried nameless in huge mass graves in the surrounding cities, for example in Mariupol, without prayer, without Christian honor, without Christian burial. In Mariupol alone, according to official data, almost one and a half thousand civilians have died these days, who were buried in joint, mass burials of mass graves, "the bishop said.
Therefore, the Head of the UGCC stressed the importance of showing respect for the bodies of killed compatriots and once again called on UGCC priests in Ukraine and around the world today, March 12, to perform funeral services for those killed in Ukraine as a result of this inhuman, horrific war.
Source: http://news.ugcc.ua/video/v_ukrain%D1%96_vedetsya_v%D1%96yna_za_g%D1%96dn%D1%96st_lyudini__glava_ugkts_u_s%D1%96mnadtsyatiy_den_v%D1%96yni_96016.html