Head of the Catholic Church in Ukraine says "I urge all of you not to be silent, not to stand aside, not to be participants in the crime" and Asks Everyone to Pray and Fast to Expel from Ukraine the Evil Spirit of War 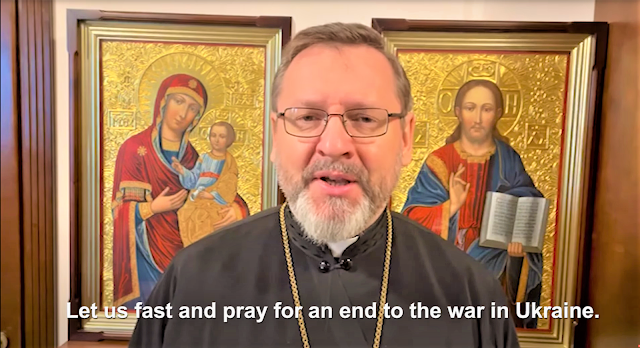 Head of the UGCC on the 19th day of the war: "I encourage everyone to pray and fast to expel the evil spirit of war and all its bearers from Ukraine"
Monday, March 14, 2022, 11:39 am
Let us fast and pray for an end to the war in Ukraine, for an end to the bloodshed, each in his own way, who knows how, in Ukraine or in the settlements. His Beatitude Sviatoslav, Father and Head of the Ukrainian Greek Catholic Church, called for this on the 19th day of the war in his daily address.

Today is March 14, 2022, and Ukraine is experiencing the 19th day of the bloody war. That night, the cities and villages of Ukraine were on fire again. Our city of Kyiv was wounded again, Russian bombs and rockets fell on the heads of peaceful Ukrainians who were trying to rest at night.
"But Ukraine stands. Ukraine is struggling. Ukraine argues that the power of the spirit can be stronger than the power of another's aggressive weapons. The Ukrainian people are asserting their right to exist, to freedom, the right to be themselves, "the Primate said.
The head of the Church thanked all those who in different parts of Europe and the world, in particular during the last weekend, took to the squares and streets of their cities in their countries to demonstrate a sharp "no!" Russia's aggression against Ukraine.
"In such circumstances, there can be no neutral position. Because he who is silent, who does not condemn this war, becomes an accomplice in the crime, the aggression of killing peaceful people of Ukraine, - said His Beatitude Sviatoslav and adds: - So thank you to all those who together with Ukraine are fighting for the right to peaceful existence ».

The head of the Church thanked the Holy Father Francis, who yesterday again stood up for the protection of the martyr cities of Ukraine, in particular Mariupol, where more than a hundred people died this night and the day before.
He also thanked all the leaders for finding a peaceful solution to the war in Ukraine. At the same time, he noted that the time for declarations and approval of principles and certain principles has already passed. We need to find mechanisms to stop this war.
"I urge all of you not to be silent, not to stand aside, not to be participants in the crime," the head of the Church stressed.
His Beatitude Sviatoslav recalled that Ukraine is experiencing a time of Lent, so he called on everyone to pray and fast to expel from Ukraine the evil spirit of war and all those who are its bearers.

People are misreading the Putin stand off o/s Kiev

Putin can steamroll Kiev - any time !

But he wants the minimum loss of life !

He wants to set a siege to Kiev,and choke Ukraine ! AND HE NEEDS CONTROL OF THE MAXIMUM NUMBER OR AIR AND SEA PORTS SO THAT HE HAS LOGISTICAL DEXTERITY AND THE MINIMAL LOGISTICS TIME AND DO A QUANTUM RAMP UP OF THE LOGISTICS ABILITIES !

Death by lack of O2 for UKR

AND ALL THIS IS HAPPENING,WHILE PUTIN IS GETTING THE PUREST OXYGEN - WHICH IS THE HIGHEST PRICE OF OIL !

ZELINKSY HAS TO NOTE THE FOLLOWING :

NATO DID NOT STEP INTO CRIMEA

NATO DID NOT STEP INTO GEORGIA

NATO WILL NOT STEP INTO UKRAINE

THAT IS Y UKRAINE AND GEORGIA ,ARE NOT PART OF EU !

THE EU AND NATO HAVE KEPT OUT THOSE NATIONS, WITH WHOM THE RUSSIANS HAVE SERIOUS ISSUES - AS A MATTER OF STRATEGY - AS THEY DO NOT WANT A WAR,WITH THE RUSSIANS !

THEY WANT TO USE UKRAINE AND GEORGIA ,TO BAIT RUSSIA , AND THEN USE SANCTIONS, TO FINANCIALLY RUIN RUSSIA - AND STAGE A COUP OR REVOLUTION, IN RUSSIA !

EU WANTS TO USE TRADE AND FINANCE TO KILL RUSSIA - AS THAT IS MORE POWERFUL ,THAN NUKES !

FINALLY THE EU AND NATO HAVE HIT ON THE RIGHT STRATEGY !

PRC will have to evaluate financial sanctions,and a naval blockade,in the Taiwan annexation.

The Key will be a naval blockade of Chinese ports and shipping lanes and Malacca !

And that is Y the US is using UKR,to send a message to PRC-Russia,and especially to PRC, to see the plight of Russia,and the capacity of PRC to aid Russia,to bypass sanctions

It will make the PRC carefully plan an attack on Taiwan,or a Naval Blockade on Taiwan.

In the case of PRC,there is also the angle of a naval blockade on Chinese ports and Malacca
(which is not possible for Russia).Once wars breaks out in SCS - there will be a defacto naval blockade - as no ship will sail in !


Y did NATO not sell an ADS to Kiev ?

In the pre-emptive strike Russia destroyed all of the above.

It did not strike NATO - that all the Russian equipment was a Trojan Horse !

The NATO deliberately left UKR to the mercy of Russian AIR FORCE AND MISSILES .

It is BECAUSE OF THE ADS AND NO PLANES,THAT RUSSIA HAS A 40 MILE CONVOY - JUST A FEW KMS,FROM CONVOY ! dindooohindoo