Head of the Catholic Church in Ukraine says "Don't just watch us being killed on TV. Do something! Do everything you can to stop this war, which is the wound of all mankind." 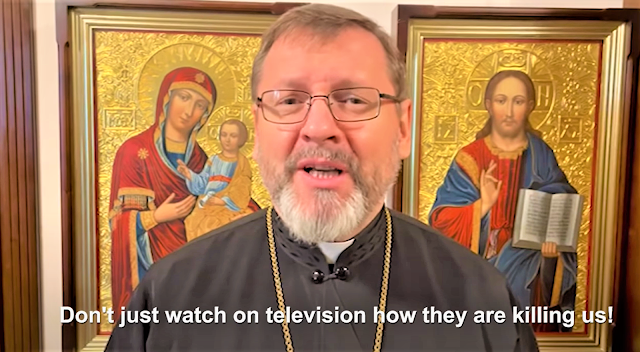 "It is bitter to see how older people are forced to come for a piece of bread" - The head of the UGCC on the 20th day of the bloody war
Tuesday, March 15, 2022, 12:36 p.m.
We fast and pray. First of all, we pray for the Ukrainian army. I encourage each of you to pray at least once a day for Our Father and the Virgin Mary for our girls and boys who are dying for Ukraine today, shedding their blood.


Caritas Kyiv has prepared a shelter for refugees in the capital
His Beatitude Sviatoslav, Father and Head of the Ukrainian Greek Catholic Church, said this in his daily military address on the twentieth day of Russia's bloody war against Ukraine.
The Primate noted that although it is already the twentieth day of the war, Ukraine is standing still. Ukraine wins. Ukraine believes. He believes in God, in His truth, in the fact that He is with us. "God is on the side of those who have fallen victim to unjust aggression. We believe that the Lord Himself suffers in the body of our people, "the Head of the Church said.
His Beatitude Sviatoslav noted that this night our cities were on fire again, our Kyiv was on fire. People died. Russian bombs fell on the heads of civilians who were trying to rest in peace.

Despite the risks of everyone who stays in Ukraine, the UGCC serves its people. The Church is with its people.
"Our priests in the occupied territories, in the besieged cities, together with our people experience their pains, difficulties and sufferings, shed tears with them, pray with them. Our parishes have become centers of social service, where many people can receive shelter and means of subsistence, "said His Beatitude Sviatoslav.
The spiritual leader said how bitter it was for him to see older people come to our parishes for a piece of bread every day: grandparents who are so heavy in their infirmities. "And I think to myself: how many of them are abandoned today, left alone in the apartments most exposed to Russian bombs ?!" he added.
He once again addressed the powerful of this world: “Do not be outside observers of the pain and sorrow of Ukraine. Don't just watch us being killed on TV. Do something! Do everything you can to stop this war, which is the wound of all mankind. "
Source: http://news.ugcc.ua/video/g%D1%96rko_spoglyadati_yak_starsh%D1%96_lyudi_zmushen%D1%96_prihoditi_za_shmatochkom_hl%D1%96ba__glava_ugkts_u_20iy_den_krivavoi_v%D1%96yni_96060.html