Head of Ukraine Catholic Church's Appeal "Open humanitarian corridors!" as "City of Mary" (Mariupol), has been turned into a cemetery for tens of thousands of people." 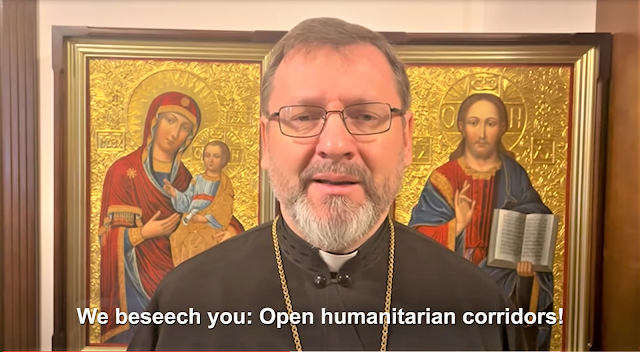 Residents of Mariupol are starving, some are dying of dehydration, and an air strike on the maternity ward is exacerbating the suffering.

Mariupol, a city in eastern Ukraine that the Greek community that once lived there once called the "City of Mary," suffers from a broken heart.

Located in a strategic position on the Sea of ​​Azov, Mariupol is the second largest city in the Donetsk region. This proved to be extremely important for Russia's plans in its two-week war against Ukraine. The capture of the city will allow Russia to link Russian-backed separatist regions in eastern Ukraine with the Ukrainian peninsula of Crimea. This will open supply lines for Russian troops along the Black Sea coast of Ukraine, and cut off Ukrainian shipping from the Sea of ​​Azov. Since 2014, Russia has occupied Crimea.>

Watch the video address of the Head of the UGCC dated March 10, 2022

But while supply lines may be open to Russian troops, Moscow has so far not allowed humanitarian corridors and civilians to flee the city of nearly 400,000 or deliver much-needed humanitarian aid. The siege of Mariupol has been going on for more than a week, with reports of civilians gathering food, boiling snow for drinking water and trying to keep warm without gas or electricity. City officials reported the death of a six-year-old child from dehydration after her mother was killed.

On Wednesday, March 9, 17 people were injured when Russian aircraft struck a hospital in Mariupol; the greatest damage to the missile struck the maternity ward of the hospital. Russia claims the hospital has been released from patients and is being used by the Ukrainian armed forces. The Mariupol City Council reported that three people died, including a child.

According to the World Health Organization (WHO), there are currently 24 confirmed attacks on health facilities in Ukraine. "These attacks resulted in at least 12 deaths and 17 injuries. It has been confirmed that at least eight wounded and two dead are medical workers. The attacks took place from February 24 to March 8, "the WHO said on Thursday.

No funeral of the dead

Conditions in Mariupol are so terrible that residents are advised not to go outside, even to search for the bodies of the dead. However, officials are beginning to bury the bodies in mass graves.

Responding to the news, the Supreme Archbishop of the Ukrainian Greek Catholic Church, Sviatoslav Shevchuk, said in a daily video address: people in Ukraine. Especially in these last moments we see mass murders in besieged Mariupol. This city, founded by the Greek community as the "City of Mary", has been turned into a cemetery for tens of thousands of people. "

"Yesterday we saw horrific scenes of shelling of the maternity ward, as well as scenes of mass graves, mass graves, where hundreds of lifeless bodies are buried," said His Beatitude Sviatoslav Shevchuk. "People are starving. People are dying from the cold. Rockets, shells, bombs fall on their heads. Today we must remember them and speak on their behalf to the conscience of the world. We ask you: Open humanitarian corridors! Give women, children and the elderly the opportunity to leave this cold, besieged city. Give us the opportunity to send food and medicine there. Give us the opportunity to save people. "

The head of the UGCC added his voice to those who call for the creation of a no-fly zone, calling: "Close the Ukrainian skies to Russian weapons and Russian aircraft dropping bombs on civilians." The United States and NATO have rejected such calls, arguing that the introduction of a no-fly zone over Ukraine would lead to direct conflict with Russia and the risk of escalating the war. Russia has the world's largest stockpile of nuclear weapons.

His Beatitude Sviatoslav also addressed the faithful of the Ukrainian Greek Catholic Church Abroad, represented in North and South America, Europe and Australia and elsewhere, with a request to hold a memorial service for the victims in Mariupol and "for all those buried in common graves without Christian prayer." and the funeral. "

His Beatitude Sviatoslav, Father and Head of the Ukrainian Greek Catholic Church, who was in Kyiv during the first week of the Russian invasion, recently traveled to the western city of Lviv to meet with one of the two special envoys of Pope Francis in Ukraine, Papal Cardinal Konrad Krajewski.