Major Archbishop Sviatoslav of Ukraine says "We are increasingly beginning to feel the effects of this war, which has resulted in mass killings." 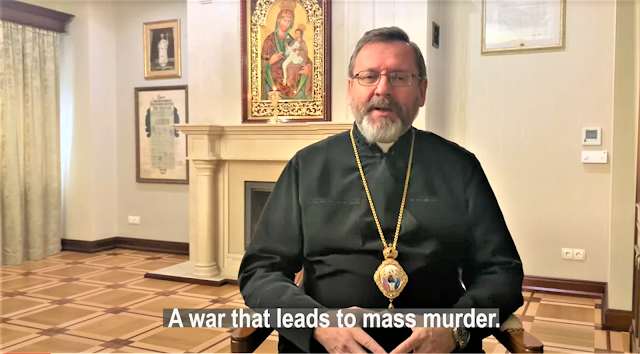 Dear brothers and sisters in Christ! Today, March 30, 2022, Ukraine is already experiencing the 35th day of this terrible patriotic war. We are increasingly beginning to feel the effects of this war, which has resulted in mass killings.
We see how the enemy ruthlessly destroys our cities and villages, shoots civilians, disregards neither the spiritual nor the cultural heritage of the Ukrainian people.
We are only now beginning to see the further consequences of this war. War always brings destruction. Whole cities and villages have turned into ghost towns. Where once there was a flourishing spiritual intellectual public life, today there are fires and winds. War always brings hunger, impoverishment of the people. We must be ready to overcome all these consequences in one way or another.
We can already see that millions of people have left their homes. Today there are talks about four million refugees who have left Ukraine. About six million people have left their towns and villages, and half of them are children.
Ukraine has lost 50 percent of its economy. This means that the next month will probably be one of the most difficult.
But Ukraine stands. Ukraine is struggling. Ukraine is winning and surprising the world.
Everyone is looking for reasons why Ukrainians have this power, why they give their lives so bravely. And we can say this today - Ukraine is defending the truth. Fighting for the truth, fighting for the fact that human life has its dignity, is priceless and just to destroy it or make it a tool, a hostage in the politics of certain political criminals is unacceptable.
This war reminds us more and more of the rule of invisible armor, the spiritual struggle that every Christian waged with the devil and evil and his servants.
Today I want to remember another rule of this spiritual struggle - evil is always hidden in the dark. If the devil, evil deeds are brought to light, if they are debunked, the devil immediately loses power. The light of God's truth weakens and disarms him. Therefore, when we hide or conceal our sins, our flaws, they become stronger, they dominate us. But when we bring them to light, go to confession, talk about them to ourselves and open our hearts to the spiritual father, it is as if we bring them to the light of the devil and take away his power.
Reflecting on the rules of the spiritual struggle, on the need to debunk, to expose evil, today I want to especially thank the media, all journalists who at the cost of their own lives tell the truth about the pain and suffering of Ukraine.
We know that in Russia some words are forbidden today, such as war. Thank you to all those who have the courage to tell the truth, not only hear the truth about Ukraine, but bring it to the world. In this way, the devil is unmasked, brought to light, and disarmed. And it gives us the strength to win.
In our spiritual life we ​​know that there are so-called other people's sins. That is, the sins of another person, but I can be held responsible for the sins of another. One such sin is the sin of silence. It is a sin to praise another. Today I want to urge all of you not to be involved in the sins of others, not to become complicit in the crimes taking place in Ukraine, your own silence or fear of telling the truth. Bring the devil to light and we will win. Because we feel that God's light illuminates the hearts of Ukrainians, and the truth for which we live and die is the content of our strength, resilience and will be the key to Ukraine's victory.
God bless the Ukrainian army! God, bless Ukraine, bless the Ukrainian people!
Source: UGCC Youtube Channel