Pope Francis Blessed an Ambulance for Children that has Arrived in Ukraine with his Almoner, Cardinal Krajewski 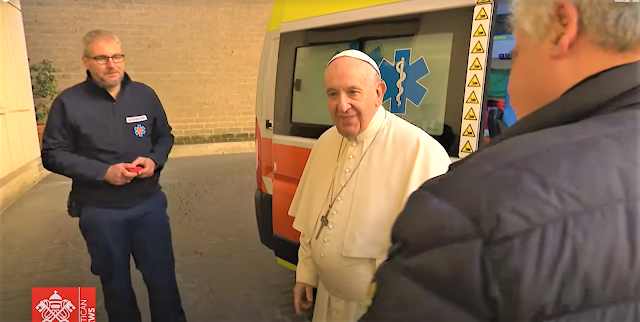 Pope Francis blessed an ambulance, at the Vatican, that he donated to Ukraine. The Papal Almoner, of the Pope, Cardinal Krajewski delivered the ambulance for injured children in Ukraine.

The Papal Almoner, arrived in Lviv, Ukraine, on Sunday, March 27, 2022, delivered the ambulance donated and blessed by Pope Francis. It will be assigned to the Regional Center for Mother and Child Health.

"It is a great privilege for me to hand over the special gift of the ambulance on behalf of the Holy Father”, said Cardinal Krajewski .

“It has a symbolic value, because the ambulance is used to save lives”.

“The Pontiff is always the one who builds bridges, who brings peace, and this ambulance is specifically for the people who suffer but also represents the Holy Father embracing them. It is a way of saying: "I am close to you, I suffer with you and I ask and beg for peace for this country which is in great difficulty".”

“I have already handed over this ambulance to the prefect of Lviv and he thanked me, he thanked the Holy Father and said that the ambulance is destined for the paediatric hospital to save the children who come from war areas”, the Papal Almoner explained.

The gift will be assigned to the regional Center For Mother And Child Health. One Ukrainian official  said it was an important gift because the number of refugees in the area has increased significantly. “Thank you Cardinal Krajewski! We thank Pope Francis for his prayers, for remembering Ukraine: it gives us strength! We want our next generation not to see war and to be healthy ”, he said.

This is his second visit to Ukraine since the outbreak of the war to bring Pope Francis' closeness and support to those enduring the conflict.