Pope Francis Quotes Pope Paul VI "The hour is coming, the hour has come, in which the vocation of the woman is fully completed..." FULL TEXT to Women's Meeting 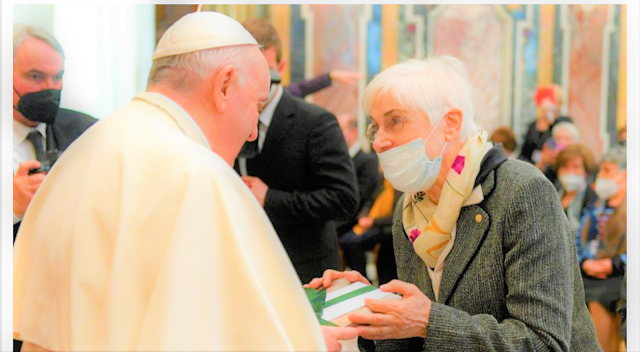 I thank the President, Renata Natili Micheli, for the words with which she introduced our meeting. She is brave this girl! She is brave! You have come to Rome to celebrate your elective Congress, whose theme goes far beyond the associative deadlines, is a broad, far-reaching theme: "Creational identity of man and woman in a shared mission". Good job. I thank you for offering your contribution to the dialogue on this issue of the identity of man and woman. A very current issue, not only and not so much in a theoretical sense, but in an existential sense, in people's lives; I am thinking especially of boys and girls, of boys and girls who, in their growth, need points of reference, adult figures with which to confront. Men and women.

Above all, however, I want to thank you because you are here, because in Italy this association of women of yours exists and continues, which is animated by the Gospel and wants to dialogue with everyone for the common good of society. And this is not to be taken for granted. Thank you.

The Italian Women's Center was born in a context of defense of the dignity and rights of women, in that period so rich, so fruitful for Italy that followed the Second World War. In that highly polarized context in an ideological sense, the CIF was born as a choice of responsibility, of the commitment to safeguard the human . It was the choice for what we now call the culture of care, an alternative to the culture of exploitation and domination. I'll come back to this.

In the Constituent Assembly, Maria Federici Agamben, the first national president of the CIF, together with the other female representatives and transversely to the party alignments, participated in the drafting of some Articles of the Constitution and influenced the constitutional "philosophy" regarding the themes of solidarity, subsidiarity and of the secular state.

For you, participation in political life, as Pius XII emphasized, does not simply respond to the demand for full citizenship of women, no, it wants to be an act of justice towards the community and an enhancement of politics considered as a form of charity, the form higher, perhaps, than charity. A commitment that takes place not in the political arena, but in terms of rights and culture. The CIF, then as now, expresses this vision of politics understood as a service to the common good animated by charity. In this regard, the Catechism of the Catholic Church affirms that justice consists in the realization of the "conditions which allow associations and individuals to achieve what they are entitled to according to their nature and vocation" (n. 1928 ).

Dear friends, it is now evident that good politics cannot come from the culture of power understood as domination and oppression, but only from a culture of care, care for the person and their dignity and care for our common home. Unfortunately, the shameful war we are witnessing proves it negatively.

I think for those of you who belong to my generation it is unbearable to see what has happened and is happening in Ukraine. But unfortunately this is the result of the old logic of power that still dominates the so-called geopolitics. The history of the last seventy years proves it: regional wars have never been lacking; this is why I said that we were in the third world war in small pieces, a little everywhere; up to this one, which has a greater dimension and threatens the whole world. But the basic problem is the same: we continue to rule the world as a "chessboard", where the powerful study the moves to extend dominance to the detriment of others .

The real answer therefore are not other weapons, other sanctions. I was ashamed when I read that I don't know, a group of states have pledged to spend two per cent, I believe, or two per thousand of GDP on arms purchases, as a response to what is happening now. Madness! The real answer, as I said, is not other weapons, other sanctions, other political-military alliances, but another approach, a different way of governing the now globalized world - not showing the teeth, as now -, one way different than set international relations. The model of treatment is already in place, thank God, but unfortunately it is still subject to that of the economic-technocratic-military power.

Why did I want to make this reflection with you? Because you are a women's association, and women are the protagonists of this change of direction, of this conversion. Provided they are not approved by the prevailing power system. As long as they keep their identity as women. In this regard, I would like to take up a passage from the Message of St. Paul VI to women, at the end of Vatican II. It says thus: «The hour is coming, the hour has come, in which the vocation of the woman is fully completed, the hour in which the woman acquires an influence, an irradiation, a power never reached before in society. It is for this reason, in this moment in which humanity is experiencing such a profound transformation, that women imbued with the spirit of the Gospel can do a lot to help humanity not to decay "(nn. 3-4). The prophetic force of this expression is impressive. Indeed, by gaining power in society, women can change the system. You can change the system, women can change the system if they can, so to speak, convert power from the logic of domination to that of service, to that of care. There is a conversion to be made: power with the logic of domination,

And I wanted to talk about this with you to remind myself and everyone, starting with us Christians, that this change of mentality concerns everyone and depends on each one. It is the school of Jesus, who taught us how the Kingdom of God always develops from the small seed. It is Gandhi's school, who led a people to freedom on the path of nonviolence. It is the school of saints of all times, who make humanity grow with the witness of a life spent in the service of God and neighbor. But it is also - I would say above all - the school of countless women who have cultivated and safeguarded life; of women who have cured frailties, who have cured wounds, who have cured human and social wounds; of women who have dedicated their minds and hearts to the education of the new generations.

The strength of the woman is great. It's big! There is a saying - more than a saying it is a reflection: if a rather young man becomes a widower, it is difficult for him to manage alone. Man cannot tolerate such great loneliness. If a woman becomes a widow, she gets away with it: she takes care of the family, she takes care of everything. You explain the difference, where is it? The female genius: this is the female genius. This example illuminates this reality enough.

The culture of care, of hospitality, the culture of being close. You live it by drawing on the Gospel. You learned it in the Church, mother and teacher, and by forming yourselves to cultivate the spiritual life first of all in yourselves, to take care of each other, in friendship, in mutual attention, especially in times of difficulty, by praying to the for each other, not chatting about each other, no, this is not right! But you don't, I'm sure.

Dear friends, for all this I thank you and I encourage you to go on. Like other historical Catholic associations, yours too has changed with the change in Italian society. For this reason it is also good to "lighten" oneself from structures that have become unsustainable, to better dedicate oneself to formation and cultural and social animation. May the Virgin Mary always accompany you, whom we will contemplate tomorrow at the Annunciation. . I cordially bless you present here and all the members, especially the most fragile ones. And also, you, please, pray for me. Thank you!