Pope's Representative Leads Interfaith Prayer Service in Ukraine saying, "...everyone prayed together and asked God for peace...Through faith, we can move mountains...to stop a stupid war..” 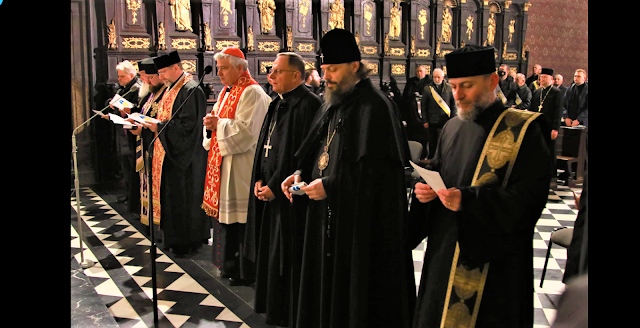 An interfaith prayer service was held in Ukraine Lviv’s Cathedral and was attended by the His Beatitude Sviatoslav, Father and Head of the UGCC, Archbishop and Metropolitan of Lviv of the RCC Mechyslav Mokshytsky, Bishop of the Curia of the Supreme Archbishop Stepan Sus, Metropolitan of Lviv and Sokal PCU Dimitry, Metropolitan of Lviv and Metropolitan of Lviv Armenian Apostolic Church, and representatives of the Protestant and Jewish communities. In addition, representatives of local regional and city authorities were present at the prayer.
Orthodox bishops were also present, including those who recognize the sovereignty of the Patriarchate of Moscow. Representing Pope Francis was Cardinal Konrad Krajewski, who presided at the interfaith prayer service for peace, at noon on Thursday, March 10th, 2022.  Speaking after the prayer service, Cardinal Krajewski, said the Church in Ukraine is united.
“A divided Church is a scandal," he said, noting that "Today we were all united, everyone prayed together and asked God for peace, according to the Gospel.” He explained that the choral prayer rises “like the smoke of the incense,” the Cardinal said “this is our strength” and he expressed his wish to “pass on this power and strength to the Ukrainian people.” “Through faith, we can move mountains. I believe in that. Even more so to stop a stupid war,” he said. The  Pope’s envoy visited the Ukrainian-Polish border crossing of Rawa Ruska-Hrebenne, where he inquired about the situation there and met with volunteers who are helping refugees waiting to cross the border. Last night he prayed with the refugees at the Parish of St. John Paul II in Lviv and had dinner with them.
Metropolitan Mechyslav Mokshytsky said, “In this tragic time of war and human suffering, a time of despair over the loss of loved ones or the abandonment of our homes, we seek to bring to our Heavenly Father a sincere common prayer for peace. That is why representatives of different religions and denominations gathered in the Lviv Cathedral."
During the joint prayer, the Head of the UGCC, His Beatitude Sviatoslav prayed for Ukraine with the following words:
“God, Father Almighty, Lord, the only begotten Son, Jesus Christ and the Holy Spirit, the only Deity and the only power! Before Your eyes today we compose the grief and pain of Ukraine. Mountains of corpses, rivers of blood and a sea of ​​tears. We pray for all those who gave their lives for the Motherland, for our army, for the sons and daughters of Ukraine who cover their lives with their chests in the face of the enemy. We pray for all the innocent civilians killed in Ukraine: women, children, the elderly. We pray for the victims of Mariupol, who are dumped in large mass graves without Christian burial and honor. Accept our prayer for their eternal rest!
God of spirits and all flesh, You overcame death, and destroyed the devil, and gave life to Your world. Himself, Lord, rest the souls of Your innocent slain slain in a place of light, in a place of flourishing, in a place of peace, where there is no sickness, no sorrow, no sigh. Forgive every sin committed by them in word, deed, or thought, as a good and man-loving God, for there is no man who has lived and sinned. You are the only one without sin; Thy righteousness is an everlasting righteousness, and thy word is truth.
Combined from Sources: https://www.vaticannews.va/en/vatican-city/news/2022-03/ukraine-krajewski-mass-homily-war-prayer.html and http://news.ugcc.ua/video/u_lvov%D1%96_za_uchastyu_papskogo_poslantsya_za_ukrainu_molilisya_predstavniki_r%D1%96znih_tserkov_%D1%96_rel%D1%96g%D1%96y_95982.html