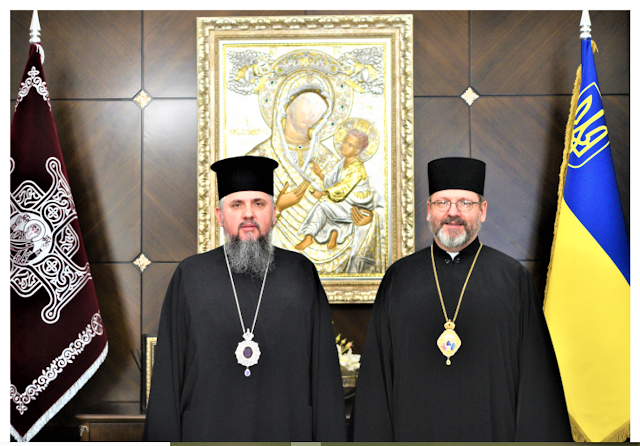 The participants of the meeting, once again categorically condemning the Russian aggression against Ukraine, discussed the current dramatic circumstances of the life and ministry of both Churches in Ukraine.
His Beatitude Sviatoslav noted that the UGCC and the PCU can and should cooperate, and the fate and future of Ukraine depend on the level of this cooperation. "We are ready to do our best to serve our people, support our statehood and work together for the victory of Ukraine," the head of the UGCC stressed.
The head of the UGCC assured the Primate of the UOC that the UGCC is ready to support the clergy of the UCC, where there is such a need and opportunity. He then told how the UGCC was trying to deliver humanitarian aid and evacuate people in different parts of Ukraine during the war.
His Beatitude Sviatoslav also told Metropolitan Epiphanius about the initiatives of the Holy Father Francis aimed at ending Russia's war against Ukraine. The Primate recalled the mission of Cardinals Krajewski and Czerny and noted the activity of Ecumenical Patriarch Bartholomew, who is to arrive in Poland next week to visit Ukrainian refugees.
Metropolitan Epiphanius stressed the importance of bilateral cooperation between Orthodox and Greek Catholics in helping the people of Ukraine during the difficult war, and cooperation within the broader framework of the All-Ukrainian Council of Churches and Religious Organizations and in contacts with foreign religious figures and institutions.

After the meeting, the Heads of the UGCC and the PCU spoke with Kyiv Mayor Vitaliy Klitschko, wishing him God's blessing in his work to protect the capital. "We are all working together for Kyiv to survive and for Ukraine to win," said His Beatitude Sviatoslav.
Source: http://news.ugcc.ua/news/glava_ugkts_zustr%D1%96vsya_z_predstoyatelem_ptsu_96213.html