Saint March 14 : St. Matilda a Queen and Mother of Otto the Great who Built Many Churches - Patron of Death of Children, Queens, Widows 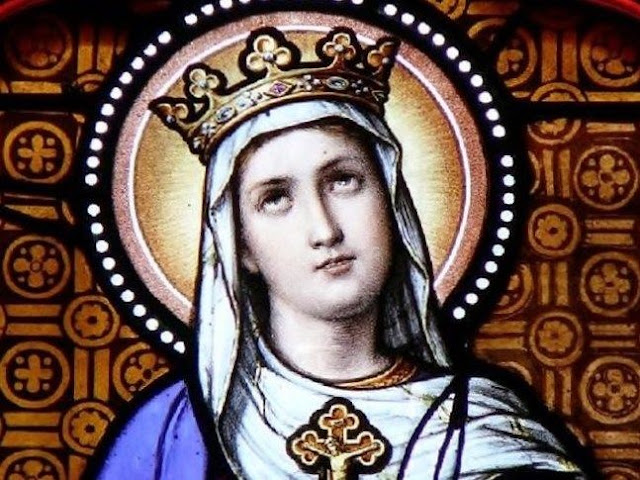 March 14
Born:
895 at Engern, Westphalia, Germany
Died:
14 March 968 at Quedlinburg, Germany
Patron of:
death of children, disappointing children, falsely accused people, large families, people ridiculed for their piety, queens, second marriages, widows
QUEEEN, MOTHER OF OTTO THE GREAT, BENEDICTINE OBLATE
Queen of Germany, wife of King Henry I (The Fowler), born at the Villa of Engern in Westphalia, about 895; died at Quedlinburg, 14 March, 968. She was brought up at the monastery of Erfurt. Henry, whose marriage to a young widow, named Hathburg, had been declared invalid, asked for Matilda's hand, and married her in 909 at Walhausen, which he presented to her as a dowry. Matilda became the mother of: Otto I, Emperor of Germany; Henry, Duke of Bavaria; St. Bruno, Archbishop of Cologne; Gerberga, who married Louis IV of France; Hedwig, the mother of Hugh Capet. In 912 Matilda's husband succeeded his father as Duke of Saxony, and in 918 he was chosen to succeed King Conrad of Germany. As queen, Matilda was humble, pious, and generous, and was always ready to help the oppressed and unfortunate. She wielded a wholesome influence over the king. After a reign of seventeen years, he died in 936. He bequeathed to her all his possessions in Quedlinburg, Poehlden, Nordhausen, Grona, and Duderstadt.
It was the king's wish that his eldest son, Otto, should succeed him. Matilda wanted her favourite son Henry on the royal throne. On the plea that he was the first-born son after his father became king, she induced a few nobles to cast their vote for him, but Otto was elected and crowned king on 8 August, 936. Three years later Henry revolted against his brother Otto, but, being unable to wrest the royal crown from him, submitted, and upon the intercession of Matilda was made Duke of Bavaria. Soon, however, the two brothers joined in persecuting their mother, whom they accused of having impoverished the crown by her lavish almsgiving. To satisfy them, she renounced the possessions the deceased king had bequeathed to her, and retired to her villa at Engern in Westphalia. But afterwards, when misfortune overtook her sons, Matilda was called back to the palace, and both Otto and Henry implored her pardon.
Matilda built many churches, and founded or supported numerous monasteries. Her chief foundations were the monasteries at Quedlinburg, Nordhausen, Engern, and Poehlden. She spent many days at these monasteries and was especially fond of Nordhausen. She died at the convents of Sts. Servatius and Dionysius at Quedlinburg, and was buried there by the side of her husband. She was venerated as a saint immediately after her death. Her feast is celebrated on 14 March.

(Taken from Catholic Encyclopedia)
Prayer to St. Matilda (Patron of those who are disappointed with their children, queens, widows, falsely accused and death of children)
O GOD, by whose grace the blessed Matilda enkindled with the fire of thy love, became a burning and a shining light in thy Church: Grant that we may be inflamed with the same spirit of discipline and love, and ever walk before thee as children of light; through Jesus Christ our Lord. Amen.