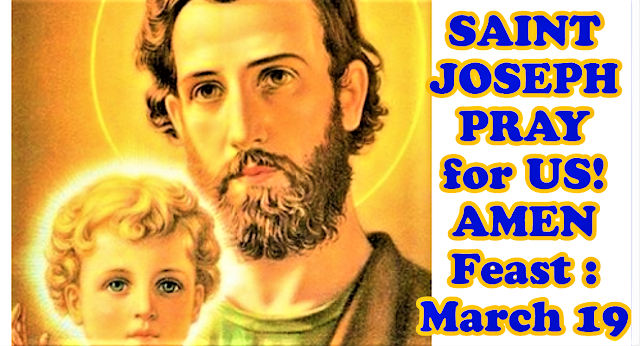 March 19 is one of two feast days in the liturgical year where we remember Saint Joseph, husband of Mary, Mother of God, and foster father to Jesus. Saint Pope John Paul II said of Saint Joseph: “March 19, we will celebrate the Solemnity of Saint Joseph, spouse of the Virgin Mary and patron of the universal Church. The extreme discretion with which Joseph carried out the role entrusted to him by God highlights his faith even more, which consisted in always listening to the Lord, seeking to understand his will and to obey it with his whole heart and strength. This is why the Gospel describes him as a "righteous" man (Mt 1,19). In fact, the just man is the person who prays, lives by faith, and seeks to do good in every concrete circumstance of life.”

*******
SEE ALSO :
Novena to St. Joseph - SHARE - Miracle #Prayer + Litany
https://www.catholicnewsworld.com/2021/03/novena-to-st-joseph-begins-powerful.html
Free Catholic Easy Recipe for St Joseph's Feast : St. Joseph's Cream Puffs
https://www.catholicnewsworld.com/2018/03/free-catholic-easy-recipe-for-stjosephs.html
Free Catholic Movie : "Joseph of Nazareth" - StJoseph stars Tobias Moretti
https://www.catholicnewsworld.com/2018/03/free-catholic-movie-joseph-of-nazareth.html
*******
Joseph was a descendant of David, the king of Israel, and therefore of royal family. Joseph was a poor, working man, trained in carpentry. He was devout follower of Jewish law, he could only afford turtle doves, rather than the recommended lamb, for sacrifice at the circumcision of Jesus.
In the Scriptures, upon discovering that Mary was pregnant, but not realizing that she had miraculously conceived, Joseph planned to divorce her quietly.
In the Gospel of Matthew 1:18-25 we read:
18 This is how the birth of Jesus Christ came about: His mother Mary was pledged to be married to Joseph, but before they came together, she was found to be with child through the Holy Spirit. 19 Because Joseph her husband was a righteous man and did not want to expose her to public disgrace, he had in mind to divorce her quietly.
20 But after he had considered this, an angel of the Lord appeared to him in a dream and said, "Joseph son of David, do not be afraid to take Mary home as your wife, because what is conceived in her is from the Holy Spirit. 21She will give birth to a son, and you are to give him the name Jesus, because he will save his people from their sins."
22 All this took place to fulfill what the Lord had said through the prophet: 23"The virgin will be with child and will give birth to a son, and they will call him Immanuel"—which means, "God with us." 24When Joseph woke up, he did what the angel of the Lord had commanded him and took Mary home as his wife. 25But he had no union with her until she gave birth to a son. And he gave him the name Jesus.
When he received the announcement from the angel of the Lord, Joseph followed his instructions, naming his new son Jesus on the eighth day after his birth. When the angel returned and told Joseph to flee to Egypt, he did so, traveling to a strange and foreign land. Joseph obeyed the angel when he told him to return, moving to Nazareth in Galilee. There, he worked as a carpenter, and we Jesus oftentimes assists him. When Jesus is twelve, and goes missing for three days in the temple, we find in scriptures that Joseph and Mary searched for Jesus with great anxiety.
Biblical historians and scholars agree that Joseph likely died sometime between Jesus’ twelfth and thirtieth birthday.  Mary is described as widowed by the time Jesus begins His public ministry.
Saint Brigid of Sweden said of Saint Joseph:
"St. Joseph was so reserved and careful in his speech that not one word ever issued from his mouth that was not good and holy, nor did he ever indulge in unnecessary or less than charitable conversation. He was most patient and diligent in bearing fatigue; he practiced extreme poverty; he was most meek in bearing injuries; he was strong and constant against my enemies; he was the faithful witness of the wonders of Heaven, being dead to the flesh and the world, living only for God and for Heavenly goods, which were the only things he desired. He was perfectly conformed to the Divine Will and so resigned to the dispositions of Heaven that he ever repeated" May the Will of God ever be done in me!" He rarely spoke with men, but continually with God, whose Will he desired to perform. Wherefore, he now enjoys great glory in Heaven."
Saint Joseph utters no recorded words in the Bible.  Apart form Mary, Joseph is the individual who spent the most time with our living Lord. We can we use the life of Saint Joseph as a model for our own, in answering the call of the Lord.
Ancient Powerful Prayer to St. Joseph
Oh, St. Joseph, whose protection is so great, so strong, so prompt before the throne of God. I place in you all my interests and desires. Oh, St. Joseph, do assist me by your powerful intercession, and obtain for me from your divine Son all spiritual blessings, through Jesus Christ, our Lord. So that, having engaged here below your heavenly power, I may offer my thanksgiving and homage to the most loving of Fathers.
Oh, St. Joseph, I never grow weary of contemplating you, and Jesus asleep in your arms; I dare not approach while He reposes near your heart. Press Him in my name and kiss His fine head for me and ask him to return the Kiss when I draw my dying breath. St. Joseph, Patron of departing souls, pray for us. Amen.
Text edited from 365 Rosaries Blog